After Life: Ricky Gervais still isn’t as funny as he was in The Office 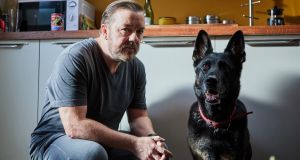 Gervais’s post-Office output is like watching him pull all the threads from it, one by one

I should probably preface this one by admitting that I think Ricky Gervais is funny. A weirdly divisive statement to make these days, and one I am about to caveat thoroughly, but I think that any review of Gervais’s work – and it is impossible to take Ricky Gervais (the concept) out of any show featuring Ricky Gervais (actor, writer, creator) – needs to state where you are, on him, as a person.

So: The Office was a masterwork, I think his naughty-but-actually-not Golden Globes monologues are good and he tweets too much about rescuing dogs for my personal tastes but I know it comes from a place of sweetness. There. Now, to After Life (Netflix, from Friday April 24th), which is not for me.

Again it feels necessary to set out a stall: I am one of those males who is irreparably damaged by watching The Office at a formative age. My speaking-voice intonation is Brentian. I can only talk to many of my friends through disfigured Office quotes. I liked The Office in a way that eclipsed part of my personality for ever.

For a militaristic Office fanboy, observing Gervais’s post-Office output is like watching him pull all the threads from it, one by one, then rebuild it, but wrongly.

First there was Extras, which was good but seemed like a fundamental misinterpretation of the prior material (“People liked the cringe bits, so give them nothing but the cringe bits!”); then Life’s Too Short (“Give them the celebrity bits from Extras! But he can’t reach things!”); then Derek, (“People liked the saccharine bits, so give them the saccharine bits!”).

After Life continues along those well-worn lines, in a way that says: “This is what Ricky Gervais does now. Stop going on about The Office. It ended 17 years ago. Grow up.” But then it’s not about me, is it?

In taking this path, Gervais has gone from career strength to career strength. If I were still a long-haired teenage rock kid I would accuse him of “selling out”, but that’s not quite true: he simply moved on without me, and on to arenas full of people who think Derek is good, and that’s fine. He is never going to make The Office again. That’s fine, too.

So the new series of After Life, which builds on the successful formula of the first: Ricky Gervais (“Tony”) is sad, still, because his wife died, and he keeps staring off into the middle distance, and his friends sort-of rally round him, and then occasionally he will lose his temper, and that’s him coping.

He has got a dog, look. He does all the Gervaisian bits you like: the sotto voce notes to self, the “Oh for f**k’s ...”, the end-of-sentence “so”. All the tricks you love, stretched tight over a sleepy village grief drama.

For someone who desperately wants Gervais to be what he once was, it is difficult to watch: he is a comedian who so deftly skirts the perfect edges of coal-black humour that it is a bit of a waste to see him do tender, and the best bits in After Life are when he tries to be funny instead of sincere (a scene in the first episode, which is just Gervais and Roisin Conaty riffing, is pure back-of-a-gig material, and it’s brilliant for it).

So for those who left Gervais behind two or three sitcoms ago, this will not win them back. But for the legion of new-money Gervais fans who I absolutely don’t and never will understand, here you go. He’s doing that thing again that you like. – Guardian