A very human way to talk about murder

Podcast: The My Favourite Murder hype is well and truly earned, even if it takes a little adjusting to cosy up to 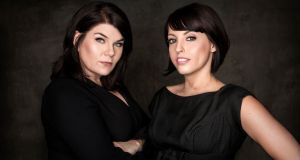 In the seemingly endless scroll of podcasts on iTunes and amid the conversations I invariably have with fellow listeners and fans of the form, one podcast has come up again and again in the same kind of fevered recommendation. I have been repeatedly pleaded with to listen to My Favourite Murder, hosted by Karen Kilgariff and Georgia Hardstark. Like many long-running podcasts, it helps to not quite start at the start, when the hosts are finding their tone and their feet, but rather jump in 10 or so episodes down the chain when the mood and structure has found itself.

The first 15 minutes of the podcast are mostly formless banter, a sort of scattered lead in, Kilgariff and Hardstark two gal-pals catching up. On previous attempts to listen to and review My Favourite Murder, these are the sections of the podcast that alienate me a little as a listener: Kilgariff and Hardstark have similar voices and know each other well, and seemingly aren’t entirely concerned with engaging with the listener in these segments.

We are tuning into them as they chat: which is a real adjustment from the squeaky clean, over-produced NPR-style documentary podcasts that capture mainstream listeners. There’s something scrappier about tuning in here, something more off the cuff and pirate-radio feeling. It’s sweary and conversational and that might be in the genuine spirit of what podcasts are: something slightly punk-rock.

It sounds like the kind of lead in that could make for a para-social love of the hosts, a feeling that you are eavesdropping on their casual conversation and are their silent friend, listening to their chat. Then, almost precisely a quarter of an hour in, they start to talk about the murders.

The shift in tone is outstanding. Kilgariff first relates the story of watching the case of Lawrence Singleton’s brutal assault on Mary Vincent in the late 1970s – on the evening news with her parents. It was a case that swept the US at the time, for good reason: Singleton kidnapped the 15-year-old Vincent while she was hitchhiking and removed her arms from the elbow down with an axe while she tried to escape.

The story of her survival is astounding – a testament to the raw human will to live. Kilgariff relates it with such ease that it’s clear she’s fascinated by the case, not referring to notes, rather speaking from a place of personal horror and fixation on the brutality of things – as well as the failure of the justice system to keep rapists and murders behind bars.

Hardstark chimes in from time to time – their rapport is easier to manage by this stage, without the effusive intensity of the introduction. Two women in conversation about the terrible things that people do to each other – or, more commonly, that men do to women – is a really refreshing angle. A risk certainly is run with relating cases like the Singleton attacks, and in the story told during the last segment of the episode too – that two women discussing true crime with a lightness and conversational tone could be considered disrespectful, or in some capacity exploitative. But this is neither: Kilgariff and Hardstark attempt to learn something about resilience, and being alive, and being safe from the stories they tell.

They are horrified and they are fascinated. This is a far more human way to talk about murder than any of the procedural crime investigation podcasts that usually clog the charts. The MFM hype is well and truly earned, even if it takes a little adjusting to cosy up to Kilgariff and Hardstark’s party, it’s well worth listening in for.

You can listen to My Favourite Murder here

The Gael Becomes Irish: the prospects for the Irish language in Ireland today
10