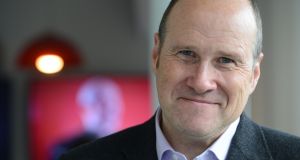 Ivan Yates: not so much a rebel as a disrupter who enthusiastically challenges pieties and sacred cows, particularly of the liberal stripe. Photograph: Cyril Byrne

As subversives go, Ivan Yates is an unlikely one. A former government minister, farmer and businessman, the host of The Hard Shoulder (Newstalk, weekdays) is, on the face of things, about as seditious as the captain of a golf club. But that’s not how Yates sees himself. Rather, as he tells one of his guests, he is “the rebel in the room”.

In fairness, Yates makes his declaration after a guest, economist Pete Lunn, has claimed that both he and his host are members of the “middle class elite”, a phrase which in the lexicon of modern insults is more damning than “Nazi”.

Lunn is on the show to discuss the rise of populist politics across the world, citing factors such as globalisation and immigration as well as cultural and economic inequality. Yates, for his part, shows his rebellious side by questioning such complex theories, instead preferring a “dead simple” explanation for the phenomenon.

After the economic crash, he says, “the dispossessed rallied to people who were anti-the elite,” pointing to Donald Trump’s electoral success in America’s declining industrial “rust belt”.  In both context and tone, the encounter seems to encapsulate Yates’s idea of rebellion: he takes delight in dismissing the notions of pointy-heads who don’t know how the world really works.

It’s not just Lunn who receives this treatment. As science journalist Leo Enright outlines the enormous legacy left by the theoretical work of the late Stephen Hawking, the presenter sounds dubious. “Is this just more esoteric academic bullshit?” he asks. Similarly, his discussion with environmental scientist Cara Augustenborg about home-heating inefficiency is marked by a weary, if chuckling, forbearance. “So give us the lecture,” he tells her.

On this evidence, Yates seems not so much a rebel as a disrupter who enthusiastically challenges pieties and sacred cows, particularly of the liberal stripe. (Of “environmental stuff”, he remarks: “We’ll genuflect to it, but we won’t do it.”) Meanwhile, pragmatism is valued over idealism.

He bemoans the “predictable chorus” of protest against Taoiseach Leo Varadkar’s renewed invitation for Trump to visit Ireland, saying a US president should always be welcomed, despite any disagreements or reservations. On this evidence, he can seem like a more refined version of the stereotypical right-wing shock jock, revelling in his own biases while getting a rise out of outraged pinko types.

But on closer listen, Yates is a more complex broadcaster. For one thing, his selection of guests and topics is, if anything, skewed towards the liberal end of the spectrum, such as his discussion with Green Party leader Eamon Ryan. Moreover, for all his occasionally mocking interjections, he allows guests to have their say. He gives a largely sympathetic hearing to the concerns of undocumented Brazilians in Co Galway, as articulated by Fianna Fáil TD Anne Rabbitte and community worker Annie Rosario.

Most strikingly, he can on occasion be swayed by his guests, even when their positions initially appear opposite to his. He thinks that Lunn speaks “a lot of wisdom”. And, apropos the recruitment of Brazilians for Irish abbatoirs, he deserves great credit for keeping his composure when a guest unintentionally utters a zinger of a double-entendre: “They couldn’t get what they call boners in meat factories”. No tittering at the back, please.

Ultimately, Yates irritates his guests mainly in order to entertain his listeners, and indeed himself. If he’s rebelling against anything, his targets seem as wilfully random of those of Marlon Brando’s outlaw biker in the film The Wild One: “Whadda you got?”

In contrast, former president Mary McAleese’s appearance on Today with Sean O’Rourke (RTÉ Radio 1, weekdays) feels truly revolutionary. McAleese’s discussion of the sadistic physical abuse her brother Clem suffered at the hands of paedophile priest Malachy Finnegan garners much coverage subsequently, as does her dim view of the Catholic hierarchy. But the tone of the interview is just as memorable, with the normally unflappable O’Rourke sounding thrown by his guest’s palpable fury at clerical iniquities.

Early on, the host suggests that even McAleese’s supporters have been “taken aback by the strength of the language” she had used about the church. “Like, for example?” McAleese shoots back, by way of reminding the presenter of her legal background.

This jousting continues throughout. O’Rourke wonders if his guest’s strong statements befit a former president, and receives a curt response: “Have you seen a book anywhere, ‘Phrases that are appropriate for ex-presidents’?” When McAleese condemns homophobia in the church, such as so-called gay conversion therapy courses, O’Rourke sounds surprised. “That’s not what the Catholic Church teaches, surely?” he asks. “Yes, unfortunately. Get with what’s going on here,” is the impatient response.

McAleese is not so much irritated with O’Rourke as incandescent with rage at the institutional church, which she describes “a primary carrier of the virus of misogyny, homophobia and anti-Semitism”, with “an underpinning determination that women will always be second class”. It’s a stunning broadside, but also nuanced and thoughtful, epitomised by her (still unresolved) views on the forthcoming repeal referendum: “As someone who did support the Eighth Amendment, I’m disappointed with the way its been rolled out.”

Her faith remains strong, however. When a listener asks if she would consider converting to the Anglican church, she replies, “Why would I bother?” But her interview sounds like a call to arms. McAleese is against what she sees as an oppressive culture of silence and fear in her church, but equally believes in “the great value of the Christian commandment to love to one another”.

Now there’s a rebel with a cause.

Radio Moment of the Week: Russian to conclusions

As the row between Britain and Russia grows, Sean Moncrieff (Newstalk, weekdays) interviews journalist John Sweeney about his experiences in Russia filming a BBC documentary about Kremlin tactics to discredit the opposition. The bullish Sweeney tells Moncrieff how he was followed, brought to a police station and targeted by pro-Kremlin media. But it’s the reaction to the piece that’s really striking.

“This always happens, every time we talk about Russia,” says Moncrieff, “and it’s almost suspicious. There’s a slew of ‘this is propaganda against poor Russia’ type communications.” The host reads from tweets and texts that call him “a vessel for anti-Russian propaganda” and claim his guest is part of an “orchestrated” move against Putin’s regime. Moncrieff is dismissive. “If you’ve got evidence that John Sweeney has been somehow turned by British intelligence or some other murky force, please send it on. And by evidence, I don’t mean you watched an edition of Russia Today.”