The visions of 2020 that never came to pass 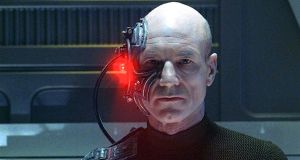 Patrick Stewart in Star Trek: The Next Generation. The 1990 film refers to ‘the Irish unification of 2024’. Photograph: Paramount Pictures

There is still time – just about – for a famous forecast from Star Trek: The Next Generation to come true. Unlike many predictions of the far future, in fact, that one is ageing well.

Shot in 1990 but set several centuries from now, it referred in passing to a series of by-then-historic events including “the Irish unification of 2024”: a prospect that sounds more plausible now than it did when first uttered by an android space explorer called Data.

But even if a united Ireland does happen in the next five years, the android will have been right for the wrong reason. The context of his 1990 conversation with Captain Picard, after all, was concern over the success of terrorism in achieving change.

Star Trek’s 2024 vision did not include the quarter century of peace soon to descend on Northern Ireland, or the rise of Scottish and English nationalism, or Brexit: all of which have since combined to make Data’s throwaway line seem much more prescient than it once did.

Closer to the mark was another 1990s visionary – little appreciated as such then – Ian Paisley Junior. Quoted in The Irish Times in 1995, on the prospect of Prince Charles becoming king, he warned that loyalism in the North could in time be undermined from the top: “I mean, what if, in the year 2020, the United Kingdom is not what it is today. What then are you loyal to?”

Getting back to science fiction, forecasts about the world in 2020 have always tended to be more pessimistic, at least about violence, than events justified. It was a staple of many 20th century books and films, for example, that there would by now have been another major global war, involving nuclear weapons, with survivors inhabiting a winter world where progress had slipped into reverse.

Even John Updike’s Toward the End of Time, set in 2020 and published as recently as 1997, had the US recovering from a Sino-American war, since which the dollar, central government, and large parts of the country were no longer in operation.

One of the few signs of technological advance in the novel was a second, artificial, moon in the sky, the remains of a project now abandoned. And that may turn to have been one of Updike’s better predictions. In 2018, ironically, China was reported to be experimenting with a moon-like object, eight times brighter than the real thing, that would provide street lighting for the city of Chendu.

Philip K Dick’s sci-fi classic Do Androids Dream of Electric Sheep? – first published in 1968 and eventually adapted for cinema as Blade Runner – also took place in a post-apocalyptic world where androids were central to a plan to colonise other planets.

The action was first set in 1992, and in a later version – after the future failed to turn up on time – 2021.  But 12 months out from the latter (touch wood), a nuclear war still seems unlikely. The constant rain in the book and film was arguably closer to the apocalypse that currently threatens us: climate change.

As for the electric sheep in the book title, that arose from the idea of real animals, including pets, being so scarce as to be available only to rich people, while others have to make do with artificial replacements. No doubt Japanese robot designers are making great strides with the sheep even now. As for the sentient androids of Dick’s imagination, capable of emotions including fear and regret, those remain some way off.

The rise of Facebook, Russian computer hackers and Donald Trump has produced a golden age of cluelessness

The idea of fearful computers, personified by a desperate Hal having his memory unplugged in 2001: A Space Odyssey, was not just the notion of sci-fi writers. In 2005, a British futurologist foresaw the arrival by 2020 of “conscious computer with superhuman levels of intelligence”.

Standard features would include emotion, he added, explaining: “If I’m on an aeroplane I want the computer to be more terrified of crashing than I am, so it does everything to stay in the air.” The reality has been more prosaic so far. As the actual 2020 dawns, hundreds of Boeing jets around the world remain grounded because their fearless autopilots overruled humans with disastrous effect.

Apocalypses apart, other things we were supposed to have seen by now included militarisation of the moon, humans on Mars, and two-way communication with extra-terrestrials.

Closer to home, meanwhile, and even further from the truth, was a doomsday economic scenario quoted in The Irish Times in 1981, when inflation was running at 18.2 per cent. If it continued at that rate, warned a senior bank official, consumers in 2020 “would need £802.97 to buy what £1 will buy today”.

Back then, the average pint of beer cost 99p, and was about to break the psychological barrier of £1. But 39 years and several other barriers later, a pint still doesn’t cost anything near £802 (€1,018), even in a Dublin nightclub after midnight. More realistic was a 1995 forecast about Irish retail trends which predicted “closure of the last remaining video rental store by the year 2020”.

In his 2006 technogeek novel jPod, Douglas Coupland had a character worrying about the rise of Google and a world where information about everything is only a click away. “I think by the year 2020 people are going to be nostalgic for the sensation of feeling clueless,” he said. This did not take account of the rise of Facebook, Russian computer hackers and Donald Trump, among other sources of information, that have instead produced a golden age of cluelessness.

Even in 2006, the prospect of a Trump presidency would have seemed far-fetched. And as a leaked US intelligence briefing from 2004 has just revealed, the rise of post-communist Russia as a renewed global power was unforeseen too.

One of the now lesser-remembered events from the turn of the millennium was the official resignation on December 31st, 1999 of Boris Yeltsin, who had personified the plight of a fallen Russia, even to the extent of his drinking habits.

But among the healthier trends encouraged by his successor has been a rise in teetotalism. Russian alcohol consumption has halved in the last years, falling below that of both France or Germany, with further measures to discourage it planned. Instead of the once-dreaded intercontinental missiles from Moscow, many in the West now fear the effects, real or imagined, of Russia as a nation of sobered-up computer geniuses.