The Hags collective: ‘After months of lockdown, it’s like being let free to fly’

A group of female artists in their 60s, 70s and 80s have come together under the moniker Na Cailleacha, or the Hags 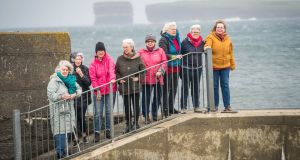 I’m sitting round a large table in the village of Ballycastle, Co Mayo, with a collective of eight women who call themselves Na Cailleacha, or, the Hags. Between them, the Hags have an accumulated age of 589 years. Eight of them are visual artists, one is a jazz musician, and one an arts curator.

I’ve just asked the group: What is one important thing you know now at this age that you wish you had known as a younger woman? One by one, they all answer the exact same thing.

“Self-belief,” says Barbara Freeman (82). As does Gerda Teljeur (77); Patricia Hurl (76); Therry Rudin, Maria Levinge, and Helen Comerford (all 73); Catherine Marshall (71); and Carole Nelson (64). There is a bit of laughter as the same replies keep being repeated, but there is steel behind the laughter. We’ve been talking about the invisibility, real or perceived, of older women in society; particularly artists.

“We were told not to be proud of ourselves when we were girls,” Hurl, a performance artist, says. “I came to feminism at 37. My mother and my sister were strong women but they were not feminists.”

There is a murmur of recognition around the table at this.

“We are the generation who grew up with women being objects of the gaze instead of being the gaze itself,” Marshall says. An art historian and curator, she was invited to join the group as a kind of mentor and anchor. Each evening, after a communal dinner, she throws out topics for everyone to discuss. Some of the topics they have discussed prior to my arrival were: friendship, death, fear, success, vulnerability. “I am very political about being over 70,” Marshall says now. “I want to be an activist for women for this part of our lives.”

I felt I had become invisible in the arts scene

We’re in the dining room of the Ballinglen Arts Foundation on Ballycastle’s main and only street. The village is on the spectacular north Mayo coast, overlooking Glenpatrick Head, and not far from the Ceide Fields. Established 28 years ago, it is a non-profit residential centre for visual artists, and the director is Orla Forde. Each visiting artist gets the use of a studio and one of the three nearby cottages owned by the centre.

The original plan for the Hags, as devised by Kilkenny-based artist Helen Comerford was to spend the month of September working together in Cyprus; supporting each other via collaboration and company. It wasn’t anything formal. The women already all knew each other, or of each other, and Comerford was the person who connected them. When Covid-19 stopped most international travel, they discovered Ballinglen had unexpected vacancies, also due to the pandemic’s travel restrictions, and came to Mayo instead.

Why the name Na Cailleacha, the Hags?

“It means ‘wise women’,” Comerford says, explaining that the intention is also humorous; to play on stereotypes about the perceptions of older women.

What can they achieve here in Mayo in their temporary collective working together that they couldn’t at home in their own studios?

“I felt I had become invisible in the arts scene,” says Teijeur, who works in large-scale ink on paper. “To be able to talk to each other here is just manna.”

“We are already quite isolated as artists, and as we get older, we have less contact with each other. Being here together, we have a unity, and we get to see each other’s work,” says Rudin,

“After months of lockdown, it’s like being let free to fly,” says Levinge, a painter.

“All my concerts had been cancelled, and this opportunity to get together with other creative artists felt like we could find a collective power,” says composer Nelson, who plays the saxaphone.

The women are not just collaborating by sharing accommodation, studios, meals and coversations together. Comerford initially didn’t think she could come at all, due to a stumble which resulted in a hairline fracture on her leg last month. She can’t, for instance, drive at present, as she is on crutches. “Everyone has been just brilliant. I never have to ask for help,” she says. They give her lifts back and forth to the cottage, carry her bag as needed, and generally look out for her.

Their studios are all in or around the Ballinglen centre complex. From Monday to Friday, the group gather at 6pm to have dinner that’s been prepared by local women. It’s a way of giving some employment to the village, as well as allowing them to have more time in their studios. At the weekend, they take it in turns to cook, and they admit it can become very competitive.

In an ordinary year, between 40 and 45 artists take up residencies here. The first time an artist successfully applies to be a resident, they come on fellowship, and don’t have to pay for their cottage accommodation or studio.

“At the end of that first residency, I then choose a piece of work for the foundation, that we keep,” director Orla Forde explains.

This July, without any public launch given the restrictions around the pandemic, the Ballinglen Museum of Art opened. The name is slightly misleading, as it’s primary function is as an art gallery, rather than a museum of curated objects. It’s the country’s newest public gallery space: a beautifully-designed vernacular building, on the main street. This is where exhibitions of some of the foundation’s 800 pieces of art done by visiting artists over three decades are now on rotating display. The museum also has the space upstairs to function as a venue for workshops and talks.

The original idea behind the Hags collective was a group of women artists over 70. (Nelson, 65, a jazz musician and composer, got special dispensation.) Do they feel more invisible as they age, given that theoretically, creative artists don’t retire?

“You don’t get invited to group exhibitions that someone curates,” Comerford, an encaustic painter, says.

“You’re not expected to work in a new media,” Freeman says. She’s a painter and sculptor, now working in digital photography and documentary. “I’m always trying to develop as an artist.”

“If you don’t show your face or your work, people assume you are retired,” Teijeur says. “That is so discriminatory. I don’t think you are taken seriously as a woman artist when you get older. I am even getting angry when I am talking about it now.”

“I don’t feel invisible,” Levinge counters. “Maybe we might contribute to our own invisibility as artists. We need to savvy up and show our work on social media, and on instagram. We just need to get out there. You are never too old to reinvent yourself.”

Next year, there will be a number of exhibitions and seminars around the country, based on the work done by the Hags collective in Ballinglen. Therry Rudin’s 45-minute documentary about the residency will be screened nationally next year as part of the Bealtaine Festival.