‘We wanted to be different’: Blood Monkey is gin with a twist 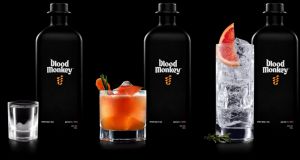 Blood Monkey is not an ingredient but a reference to sailors

Drinks entrepreneur Jason Kidd started his career with the big boys, working abroad with Diageo, Heineken and Foster’s in Australia, before moving back to Ireland. He and his business partners own London craft brewery Anspach & Hobday in Bermondsey, and are currently developing a vermouth. Their most recent launch is Blood Monkey Gin.

“In 2018 I started to explore gin and realised that they all seemed to follow a similar path. The only differential was the provenance and the botanicals, but most had a similar taste profile. Coming into a growing market with a lot of brands already present, we wanted to be different – both with our brand and the flavours of our gin.

“Jenever was quite a hard drink originally, consumed by sailors, dockers, and working men; it came back through Irish and English ports at the end of trading routes, but our palates didn’t like it, so they started adding whatever botanicals they had to hand. Unlike other gins, which have a neutral grain base spirit, Blood Monkey has a malted grain base that gives it a viscosity like a white whiskey and smoky caramel notes, preceded by the lemon peel you find in other gins. But it should have more interest and less floral and citrusy notes.”

He wanted a gin that could be consumed neat, from the fridge or freezer, as well as being used in cocktails. The botanicals include Szechuan pepper and lime leaves. “These give it a slightly spicy kick and some extraordinary flavours.”

Blood Monkey is not an ingredient but a reference to sailors, who drilled into a barrel to steal the liquor inside, known as “bleeding the monkey”.

They were prevented from launching the gin (which is distilled by West Cork Distillery) in high-end bars and hotels by lockdown. “We found ourselves sitting on a lot of stock, so instead we went to high-end spirits specialists. We are getting great feedback so far; not only are customers seeking it out, they are also repurchasing.” Blood Monkey Gin (40 per cent ABV) sells for €45 a bottle, from specialist retailers.