‘Take back control’: why the Brexit slogan resonates across Europe 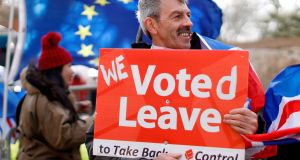 A pro-Brexit activist holds a placard outside the Houses of Parliament in London. Photograph: Tolga Akmen/ AFP/Getty Images

An irony of the Brexit debacle is that it has taken the focus off major flaws in the European project. A referendum stemming from some quite justified criticism of the European Union has blinded us to the fact that Europe is in a mess.

Several countries, including our own, have highly unstable governments patched together from competing factions. Public debate is coarse and polarising. The result?

“Representative democracies are showing an increasing weakness and lack of efficacy in governing the great contemporary challenges, such as climate change, migrations or the protection of social rights,” says Michele Nicoletti.

Professor of political philosophy at University of Trento, in Italy, and a former chairman of a major European human rights watchdog, Nicoletti is in Dublin next week diagnosing Europe’s maladies for a public lecture at the Royal Irish Academy.

He emphasises the need to look beyond the troubles of any one country, and to acknowledge the fear, intolerance and “mistrust in the ruling classes” which has swept across Europe. “We cannot remain indifferent to these fears and we must ensure that our institutions – at local, national and international level – can regain the ability to address these fears head on, to listen to them and provide comfort, to instil courage and hope.”

Part of that process is for governments to try to understand why so many people feel dispossessed or victimised; why the slogan “take back control” resonates so widely. Nicoletti believes it starts with the human wish for “self-belonging” – a desire to have both one’s dignity respected and one’s uniqueness recognised.

While this “principle of self-belonging” sounds very theoretical, it “has to be translated into concrete legal and social protections for the human being,” says Nicoletti, this week’s Unthinkable guest. This includes strengthening instruments for the protection of individuals, and combating “the invasion of the private sphere by criminals and speculators”.

Can you explain the principle of ‘self-belonging’, and why it’s important.
“People live today in a situation of great disquiet towards the future and in a state of fear. I define this fear as the fear of being dispossessed of oneself. Many people are afraid that their government has escaped from their hands and ended up who knows where – in the hands of international finance or technocrats or uncontrolled migration dynamics.

“I interpret ‘sovereignism’ also as a reaction to this fear: as a desire to be ‘sovereign’ over our own life, to decide on our own destiny. If this is true, fear can be answered in two ways: either by seeking protection from those who are strong or by trying to find resources in ourselves, in order to face the current challenges.

“Those who think to save themselves by being protected from others end up increasing their dependence and the sense of dispossession. Instead, we must go the opposite route, the way of empowerment of individuals and communities. The principle of self-belonging goes in this direction. It affirms that every human being belongs to herself and is not a ‘thing’ in the hands of others or a ‘fragment’ of a whole.”

How do national and international institutions currently fail to recognise the ‘self’?

“Recognising the difference of each individual and community ‘self’ and paying equal respect to them is tiring and expensive.

“It is easier to govern slaves than free subjects. We know this from the ancient Greeks. Yet the true political government is the government over equal and free beings. The rest is a paternalistic or despotic government.

Is it important for politicians to always keep their promises? One of the difficulties for the British government is that the electorate has voted for something which most political leaders believe will do the country harm.

“In a democratic regime, it is essential for politicians to respect the will of the people. But the people need to have clear and real alternatives... Today, after many months, British citizens do not know yet what they have opted for. This is totally irresponsible behaviour on the part of the rulers.

“At this point, it would be good to clarify what is the actual alternative to Brexit and to call citizens back to choose between two clear and real alternatives. This would not be a U-turn on policy. On the contrary, [it would be] the only way to respect citizens’ will and to take it seriously.”

A number of political philosophers, including Onora O’Neill, have voiced concern about an over-emphasis on rights today at the expense of duties. What duties do citizens have locally, nationally and internationally?

“We owe to Simone Weil in her wonderful book L’enracinement the idea that ‘The notion of obligations comes before that of rights… A right is not effectual by itself, but only in relation to the obligation to which it corresponds’. Declaring that every human being has the right to food without having fixed a corresponding duty to ‘feed the hungry’ is an empty enunciation.

“Without a minimum of solidarity the human species is unable to survive. We are the mammals that have the longest gestation period and dependence on other human beings to be fed. So the duty of caring for others is written in our DNA.

“On the social and political level we find the same centrality of the duties of solidarity towards the other members of our own community, be it the local community, the national state, Europe or the society of mankind. This is why citizens have always had not only rights but also duties: to contribute to the common defence of life and protection of the vulnerable people, to use their own talents and pay taxes, to respect common rules and to change them democratically when they are wrong.”

Other thinkers, such as Zaki Laïdi and Yuval Noah Harari, have traced the current political malaise to a loss of meaning within western countries. Is there a political vision for Europe which can give people a sense of collective purpose?

“There is no doubt that in contemporary societies there is often a loss of meaning. But I have doubts that this loss is mainly due to politics. It is not the aim of politics to give sense to life. Love, religions, the arts and other more important things can play this role.

“But politics – and only politics – can achieve a peaceful and just order in which it is easier for people to rediscover the meaning of their lives.

Humanising politics is the European mission

“This would seem to me a great task for politics and also a good reason for commitment. The political vision of Europe that can still mobilise the energies has always been the same since the birth of European civilisation and it derives from its humanistic traditions: building a city at the service of the human person, her freedom and her search for beauty.

“Humanising politics is the European mission. And this can be done only if the dignity of every human being is respected, if power and technology serve the human person, if the critical rationality is preserved.”