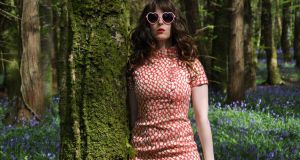 Jennifer Walshe: one of the first women to be commissioned under an NCH and Sounding the Feminists scheme

In what way were Liechtenstein, Switzerland and Andorra the laggards of Europe? In respect of granting women the right to vote in national elections, a right Andorra recognised in 1970, Switzerland in 1971 and Liechtenstein in 1984. The change in Liechtenstein came after a referendum with a Brexit-like margin, and an earlier referendum, in 1971, had yielded the opposite result by almost the same small margin.

Twenty years ago, when I researched and presented a chronological, year-by-year, 100-programme series about the music of the 20th century for RTÉ Lyric FM, I contextualised each night’s music with snippets of news from the relevant year. The slow pace at which universal suffrage made headway around the world was dispiriting to recall.

There was a big Me Too moment in 1906, when the great tenor Enrico Caruso appeared in a New York court over what became known as the Monkey House incident. A policeman arrested Caruso in the Monkey House of the Central Park Zoo and gave evidence that he had seen the singer hassling two 12-year-old girls, and pinching the bottom of a woman, who was annoyed enough to hit him.

This newspaper carried nine articles on the matter between November 19th and December 31st, 1906. Both sides made the expected arguments in court, where Caruso was convicted and fined $10. When he returned to appeal his conviction, he lost. His career continued, unaffected, until his death at 48 in 1921.

The year of the Caruso assault was the year women were first granted the vote in the northern hemisphere. Small wonder, then, that within a few years an International Women’s Day would be held, although it would be more than half a century before it would achieve wide traction.

Its celebration in the world of music has taken even longer, although the National Chamber Choir – today’s Chamber Choir Ireland – did run concerts of music by women on March 8th for a number of years in the 1990s. Choirs are pretty lucky when it comes to programming in this regard. They can reach back to the 12th century through the work of Hildegard of Bingen.

It’s just a year since the Minister for Culture Josepha Madigan announced a “five-year partnership initiative to promote and commission work by female artists by the National Concert Hall together with Sounding the Feminists”, with the department contributing funding of €20,000 a year.

New commissioning schemes are part of the project, and last Thursday the names of the first women to be commissioned under the schemes were announced. The award for an established composer went to Jennifer Walshe and for an emerging composer to Claudia Schwab.

Walshe has proposed a work exploring the idea of “Irish music” for ensemble and artificial intelligence, which she will create in collaboration with digital artist Memo Akten, who proposes “to train a neural network on a wide range of videos and recordings of Irish music as well as material from the National Folklore Collection”.

The goal of Sligo-based Austrian fiddler Claudia Schwab is to “add the female sound world of a contemporary Ireland in which diverse cultural backgrounds are realised as a potential for exciting new intercultural creations”.

The announcement of the commissions was followed by one of the NCH’s Female Composer concerts, the first in the series of focus on baroque music. Soprano Sarah Power and members of the Irish Baroque Orchestra directed by Claire Duff performed works by Isabella Leonarda, Barbara Strozzi, Elisabeth Jacquet de La Guerre, Maria Antonia Walpurgis, and Maddalena Laura Sirmen with a refreshing elan that has not always been a feature of performances in this series. If you wanted a proof-of-concept demonstration that all-female composer programmes of unfamiliar pieces can work on a musical level, this was it.

And then there was the orchestral concert that brought Joan Towers’s Second Fanfare for the Uncommon Woman, Clara Schumann’s Piano Concerto, the premiere of August Holmès’s symphonic poem Roland Furieux (Holmès was born in Paris to an Irish father and a mother of Irish descent), and the Symphony No 3 by the African-American Florence Price.

I’m kidding you. That concert was given in Cardiff by the BBC National Orchestra of Wales under Valentina Peleggi with Mariam Batsashvili as soloist. RTÉ doesn’t yet dare that kind of commitment to the cause of female composers.

The RTÉ NSO’s concert last Friday was not, however, ignorant of International Women’s Day. Ilan Volkov preceded his lucid, well-paced account of Mahler’s Seventh Symphony with Finnish composer Kaija Saariaho’s D’om le Vrai Sens (The True Sense of Man). This clarinet concerto was inspired by a series of medieval tapestries depicting each of the human senses (including the sixth) and by the clarinet playing of fellow-countryman Kari Kriikku, who seems happiest when treating his instrument as a one-man generator of sounds you might expect to come out of an electronic studio.

The piece is theatrical. The soloist moves through the auditorium, and through the orchestral musicians on stage, and some of the players leave the stage at the end to play in the aisles and float the most delicate of shimmering sounds over the audience. The piece was a tour de force for all involved.