Why is Copper Face Jacks so popular? ‘A one-eyed hunchback could score in this pub’

The ‘big, sweaty’ Dublin nightclub is successful because it ‘doesn’t have notions’ 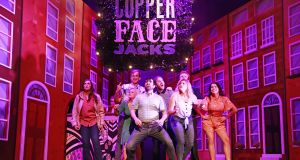 If there was ever a Dublin club whose reputation precedes it, it’s Harcourt Street’s Copper Face Jacks. Even the Lonely Planet got wind of that idea that it’s a beloved haunt for off-duty nurses and policemen. “Don’t let the presence of the law put you off though,” read a recent edition of its Dublin guide. “From what we’ve heard, they’re the biggest miscreants of the lot, especially if there are nurses about!”(“A one-eyed hunchback could score in this pub,” surmised another online review).

For this and other reasons, Coppers has enjoyed pride of place in shows like Republic of Telly and Can’t Cope, Won’t Cope, but it was only a matter of time before someone thought to fully immortalise it in pop culture. Dubbed “West Side Story – With Carvery”, Copper Face Jacks: The Musical stars Johnny Ward, Michelle McGrath and Roseanna Purcell and has been created by writer/creator Paul Howard, also known for creating Ross O’Carroll Kelly.

7 Brexit: UK calls on EU to ‘shake off any remaining ill will’ amid fallout over North trade move

8 TV guide: 20 of the best shows to watch this week, beginning tonight

9 Four men arrested over Dublin shooting of woman and man

10 Laura Whitmore: ‘I’ve had enough of being trivialised and gossiped about’

11 Colin Farrell: ‘After 20 years of drinking the way I drank, the sober world is pretty scary’

12 Ruthless Leinster play their cards right in rout of Ulster

16 Fintan O’Toole: The Covid-19 pandemic should be the last hurrah for Irish stoicism

17 Air to the throne: Meghan and Harry set to lift lid on royal split in TV interview

18 'The depth of my depression was irrational . . . Give yourself time. Get the support you need'

22 How will Denis O’Brien’s departure change the Irish media landscape?

23 Bank of Ireland closure brings out true grit in Abbeyfeale

24 Nigel Farage steps down as leader of Reform UK party

28 Tin Cup: A box office hit that played its way into part of golfing fabric

30 Affordable housing: Can Land Development Agency succeed where others have failed?

32 Stuff happens: Why you have so much household clutter – and how to get rid of it

34 Murmuration of starlings: How our stunning front-page photograph was taken

39 Ross O’Carroll-Kelly: ‘We’d be a lot better off if we’d remained port of Britain’