Review: A new multiple-role-play comedy features so many characters it’s a wonder it didn’t think to give one to its protagonist 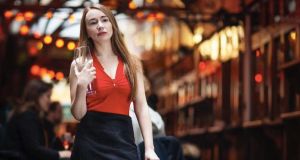 Sharon: despeartely trying to get her act together

Sharon
★★
Bewley’s Café Theatre, Dublin
A young woman coasting towards her 30s, and making dubious life choices, Sharon is the kind of person who retreats instinctively from affection, resists marriage and recoils outright from the prospect of parenthood. More than a few people will identify with that, or the attendant pressures of a fretting mother and various friends now in the family way. But only some will truly understand the pursuit that gives Sharon most satisfaction – amateur drama.

The second play from rapidly emerging writer Katie Holly has an obvious affinity with zero-frills performance, taking the unadorned multiple-role-play form of an enthusiastic improv class.

Irene Kelleher plays Sharon, a sardonic observer, who retreats from the aftermath of an ill-advised affair with her boss to her densely populated Cork hometown.

Its many inhabitants are divided between two performers. The first is the excellent Marie O’Donovan, who plays, among others, Sharon’s pal Gemma; her new employer, the overbearing publican, Kate; a local auld fella; and an autistic stage manager, all unfussily delineated. The second is Mark Griffin, tall and dashing, who plays, among others, Sharon’s moithered mam; the other local auld fella, and Sharon’s dreamy new boyfriend, Nigel, a man who is patient to the point of complete masochism.

Under Holly’s direction, this gallery of types is evinced via the single-mannerism performance style of so many multiple role-play comedies. But with so many characters on display you could be forgiven for wondering why no one thought to give Sharon one. “He’s like a new pair of shoes,” Sharon says of Nigel, with store-bought sass. “I’ve got to wear him in.”

Indeed, forever pushing Nigel away with her kvetching, without conveying what might attract him, or mercilessly teasing the backwards locals, or snorting derision at grotesquely competitive friends, Sharon is the kind of wised-up cynic who automatically suggests the soul of a bruised romantic.

The play follows suit, sliding from the romantic tensions of a breezy summer read to a perfunctory heart-stomping melodrama and finally unadulterated mawkishness. Like the play,Sharon is involved with, which suddenly elevates Sharon to a lead role in a moment of crisis, that seems to dramatise the gap between a pose of experience and the real thing. Sharon, then, is a midlife coming of age story; the expressions of a young woman still trying to get her act together.