Youngest ever winner of the Perrier Prize, he became the UK’s biggest stand-up attraction

Sean Hughes jokes about his clothing during his 1991 show "Live & Seriously Funny", the comedian has died aged 51. 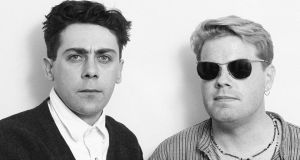 They were Irish comedy’s equivalent of the Famous Five, though nobody ever called them that. Michael Redmond, Kevin McAleer, Ian MacPherson, Owen O’Neill and Sean Hughes dragged Irish comedy out of its Jury’s Irish Cabaret backwater in the 1980s and kicked open an international door, through which Dylan Moran, Graham Norton and others were later able to amble through.

The comedian, who had liver cirrhosis, has died at the age of 51.

As the youngest and cheekiest of the five, Hughes became a sensation when at the age of 24 he won the prestigious Perrier Prize (now the Edinburgh Comedy Awards) at the Edinburgh Festival in 1990.

Hughes’ celebrity wattage has dimmed in recent years. But this is largely to do with his refusal to compromise or exchange scripted and vetted banter on the banal comedy vehicles of today’s television. Hughes listed the biggest influences on his work as Milan Kundera and Samuel Beckett; he was never going to appear on any programme with the word “Celebrity” in its title.

From Firhouse in Co Dublin, Hughes first made his mark on Irish television during the 1980s in long-forgotten RTÉ “youth” offerings such as TV Gaga and Megamix. He moved to London soon after, and was quickly elevated from open-mic slot status to headlining large venues such as the Comedy Store in London’s West End.

At that time the annual Edinburgh Festival was the comedic equivalent of the Olympics, and, in 1990, Hughes became the youngest ever winner of its Perrier Prize. To put that achievement in context, previous winners had included Stephen Fry and Hugh Laurie. After Hughes, the winners were Frank Skinner, Steve Coogan and Lee Evans.

Comedy was becoming “the new rock’n’roll” and Hughes was being groomed as its young, exciting frontman. But his sense of artistic bolshiness saw him turning down plenty of lucrative offers from TV stations for a comedy vehicle of his choosing. He signed up with Channel 4 to star in his own sit-com, on the condition that he had total creative control.

His live tours of the UK and Ireland at the time were more like rock shows than stand-up gigs. Hughes had attracted a new audience to stand-up but he was unhappy with other developments.

Promoters, managers and agents descended on the stand-up boom of the mid 1990s, levelling out material and ironing out quirks. In his own infuriatingly high-minded way, he despaired of the direction live comedy was going; Hughes was passionate in his belief that, done best, stand-up could be an art form.

Having long since settled in London - “I am one of those Irish people who would do anything for my country except live there” he always said - he shifted his gaze towards writing and non-comedy acting. He was particularly proud of his 2000 novel, It’s What He Would Have Wanted, a well-reviewed piece of work that displayed a deft, literary ability.

In an irony he would begrudgingly enjoy, a lot of today’s tributes to his life and work point out that “he will be best remembered for his time as a team captain on the music quiz show Never Mind The Buzzcocks”. Hughes worked on the show from 1996 to 2002 but was always astonished at how so flimsy a comedic concept could be so well received.

One of his proudest moments was when he received a fan letter from a reader who had been moved by It’s What He Would Have Wanted. He happily told people that the letter-writer asked why, with such great literary ability, he was wasting his time on a throwaway programme such as Buzzcocks.

As well as acting, writing (including a tenure as an Irish Times columnist), and working as a DJ for the BBC , he was a major music fan who went on to befriend some of the acts he adored, including Morrissey, Julian Cope and Robert Smith of The Cure. It was after an almighty drinking session with Smith some 10 years ago that Hughes decided to stop drinking for good. “I’ve used up all my coupons,” he would say.

Having at one time being the biggest stand-up attraction on the UK circuit in the wake of Sean’s Show, he was glad to move away from the limelight. He was witheringly, hilariously critical of today’s lowest-common-dominator big comedic names.

Oddly, the last time this reporter talked to him, he provided his own obituary. He was talking about how he still gets recognised on the street as “that guy from Never Mind The Buzzcocks” - more than a decade after he left the show. “I’d hate to think I’ll be remembered for Buzzcocks. I was so proud of what I did on Sean’s Show - I’d like that to be my legacy.”

It’s a legacy that also needs to include the fact that he was a coruscatingly talented and original comic who never compromised or colluded in commercially driven mediocrity.

Of the many tributes to his groundbreaking work, the best came from his good friend and fellow comedian Al Murray (aka The Pub Landlord). “Sean won the Perrier the summer I decided to try being a comic. He was being daft, meta, ironic and Byronic all at once; stand-up had reinvented itself. He made stand-up look fun, glamorous and above all a creative place where you could play.”

Murray is just one of many of today’s big names who cite Sean Hughes as an inspiration and a guiding light.

But there are also those of us who will remember him best for the time he appeared on the TV programme Come Dine With Me. He used the same three ingredients for his starter, main course and dessert just to annoy the foodies. And then he made everybody dance to a Smiths tribute band who were playing live in his living room.

Five of his best jokes

“Everyone grows out of their Morrissey phase . . . except for Morrissey.”

“”Anyone in from the old country? Yeah? What part of Greece are you from?”

“I once overdosed on amphetamines: I was rushed to hospital and made to work the night shift.”

“I saw my brother fight at the National Stadium. It was at a Depeche Mode concert.”

“”Where’s the Irish Army? He’s outside.”