Michael Colgan has ‘case to answer’ over behaviour at Gate

Review heard reports from 56 people about behaviour of former artistic director; board resignations to be fast-tracked 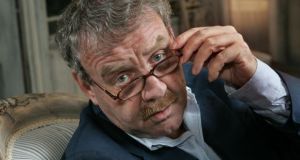 Michael Colgan, who was for 30 years one of the leading Irish cultural figures. Photograph: Matt Kavanagh

A review into allegations of inappropriate behaviour and abuse of power against Michael Colgan says the former artistic director of the Gate Theatre has “a case to answer”, the theatre’s board has said.

It also said “a culture existed in the Gate whereby too much power was vested in one individual and people felt unable to speak out”.

Unreservedly apologising, the Gate released the recommendations of a four-month independent review begun in November by labour expertGaye Cunningham, following allegations against Mr Colgan, including by seven women who detailed their experiences in The Irish Times.

The review, which was commissioned by the Gate board, received input from 56 individuals, including current and former employees, freelance staff and board members. Mr Colgan was also interviewed as part of the process. The board’s statement said all recordings and documents were destroyed following the compilation of the review.

Chairman of the Gate board Peter Crowley said a copy of the report will be sent to Mr Colgan.

The board said the review has “credible and consistent testimonies” that indicate Mr Colgan has “a case to answer” about “dignity at work issues, abuse of power and inappropriate behaviours”.

In her report, which will be published following legal checks, Ms Cunningham said that the board should now consider “what action, if any should be taken” against Mr Colgan, “acknowledging that he is no longer an employee”.

The phrase “a case to answer” does not have a standard legal meaning, but appears to suggest there would be another stage of investigation.

Mr Crowley said the board plans to release the full review “as soon as possible”, after the “necessary legal review process”.

When asked if there were particular matters of legal concern in the report, Mr Crowley said: “I wouldn’t say it was a minefield,” but there are “employment issues, and people’s rights to due process”. He said the board needed to be sensible legally. “Part of the job is to be fair.”

Mr Crowley said the board recognises “a culture existed in the Gate whereby too much power was vested in one individual and people felt unable to speak out and we accept that the board had an onus to be more aware of the culture prevailing in the theatre over time”.

The Cunningham report recommends that board changes already scheduled for 2018 should be fast-tracked, though Mr Crowley said changes had been already been put in train as part of its governance review.

David Bunworth, who has been on the board for 14 years, and Grace Smith, who has been there for five years, had agreed to stay on pending the completion of the independent review, but will now step down in March as part of scheduled board rotation.

Mr Crowley said he accepted that board appointments in future should be open, transparent and advertised, and as well as drawing on business, law, marketing and PR, should include people from freelance/arts, industrial relations and other disciplines.

The recommendations include acknowledging the difficult painful process for those who came forward with their testimonies, and says there will be a policy of zero tolerance of abuse of power and infringement of dignity at work.

The board welcomed the review, accepted its recommendations in full, and said it was “very grateful to those that came forward to share their views and experiences with Ms Cunningham, as their participation will help lead to real and meaningful change at the Gate”. Participants were guaranteed anonymity and confidentiality during the process.

The recommendations include an employee assistance programme; confidential counselling should remain in place for a year; the hiring of an HR director, along with a code of conduct for directors, serving for fixed five-year terms. The artistic director should be independent of the board.

Meanwhile, all managers at the Gate should be given “comprehensive training” to “ensure they are appropriately and adequately equipped to deal with dignity at work issues and complaints”, she recommended.

Ms Cunningham is to remain on in an advisory capacity to work with the Gate.

The Arts Council, which was sent a copy of the report, said it noted the recommendations about dignity at work, abuse of power and related inappropriate behaviour and also the board’s commitment to implement them in full.

From when the allegations were made, the board says it felt a responsibility to “respond to the specific issues as sensitively, professionally and proactively as possible” and the review is a key step. It says it will use the review as “a catalyst for positive change” and will see through the programme of change.

Mr Crowley sought to reassure people who took part in the review that “their voices have been heard and that their participation will lead to real change in how the Gate operates in the future”.

Selina Cartmell, who took over as artistic director at the Gate after Mr Colgan, commended the bravery of those who participated in the review. She said that leading the theatre through “the difficult times of the past few months has been deeply confronting and challenging”. The “journey of transforming the culture at the theatre” has started, she said. “I am personally committed to rebuilding trust” in the arts community, she said, “as we at the Gate collaborate, listen to others and strive for artistic excellence”.

Mr Colgan has declined to comment bar an article he wrote in the Sunday Independent where he took “serious issue” with some coverage, saying his actions should not be equated with “sexual crimes”. He apologised for causing distress, saying he had failed to see the difference between friends and colleagues.

Recommendations of the Gate Report

The following recommendations are designed to ensure that the Gate Theatre and especially the practitioners who work there and all who have had dealings and continue to have dealings with the Gate can move to a more positive and safe place in future:

My recommendations are as follows:

1. The Board should acknowledge the difficult painful process for those who came forward with their testimonies and communicate appropriately.

2. Michael Colgan has a case to answer in respect to dignity at work issues, abuse of power and inappropriate behaviours, and the board should consider what action, if any should be taken, acknowledging that he is no longer an employee.

3. A free confidential employee assistance programme should be extended to any staff, former staff and any person affected.

4. A policy of zero tolerance of abuse of power and infringement of dignity at work issues should be enacted by the board and responsibility for development and implementation of an action plan devolved to the executive director.

5. Comprehensive training should be provided to all managers to ensure they are appropriately and adequately equipped to deal with dignity at work issues and complaints.

7. All future staff and freelancers should be given the policy and procedure for Dignity at Work on their first day of work.

8. A dignity at work contact person should be assigned for the freelance community, e.g. nominated by Equity.

9. Appointments for the board should be open and transparent and advertised in future. As well as the world of business, law, marketing and PR the make up of the board should include individuals from freelance/arts, industrial relations and other relevant disciplines.

10. HR issues should be a regular agenda item on board meetings.

11. Some occasional staff presentations should be given at board meetings to familiarise board members with the work of the theatre and the workers.

12. The tenure of artistic director should be limited.

13. The Arts Council should assist the Gate in measuring progress on their equality and Dignity at Work Strategy currently being developed.

14. The resignations from the board scheduled for 2018 should be fast-tracked to within three months of the date of this report.

The movie quiz: Charlize, Arnie, Kurt, Helen – who hasn’t been in a Fast & Furious film?
7

True History of the Kelly Gang: How an Irish bandit became Australian antihero
10

What’s so funny about philosophers?
Real news has value SUBSCRIBE