Love and desire for Valentine’s week: The best theatre this week

A tragedy born of greedy matchmaking, a hesitant love affair barely whispered from the rooftop, and the situation of two work colleagues who wake up together in bomb shelter 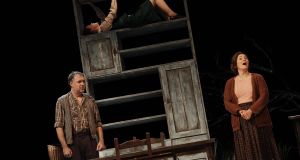 Brian Doherty as Mike Glavin, Gráinne Good as Sive and Andrea Irvine as Mena in Druid’s production of Sive by John B Keane at the Gaiety Theatre. Photograph: Ros Kavanagh 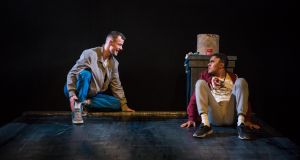 Alan Mahon and Josh Williams as Mickey and Casey in If We Got Some More Cocaine I Could Show You How I Love You.

Gaiety Theatre, Dublin. Ends Mar 3. 7.30pm (Thurs and Sat mat 2.30pm) €18.50-€46. gaietytheatre.ie – Last staged by Druid in 2003, at the height of the boom, and now revived during a staggeringly unequal economic recovery, Sive is a lesson in desire, social transformation, materialism and how much there is left to discover in a play. “That we might never want!” a clear-eyed Traveller toasts the vexed household in John B Keane’s debut from 1958, but the play is all about wanting. A resentful woman and a craven matchmaker conspire to marry off the young Sive to a decrepit farmer for a handsome reward, while she, the “illegitimate” daughter of a passionate mother, steadily loses her own agency.

In between, Druid’s new production is a study in sin and seduction: Tommy Tiernan’s matchmaker, Thomasheen, makes for a comically slinky devil; Andrea Irvine’s aunt Mena a desperate cajoler; and, recast as mother and daughter, Marie Mullen and Radie Peat become mystical Travellers who might help save the young girl from improper male clutches. Sive herself has never been given much to work with, more sacrificial than substantial, but in an entertaining new production it seems greedy to want more.

Mick Lally Theatre, Galway. Ends Feb 10. 8pm. €16 druid.ie – It’s Halloween night in Ennis and two young lovers, Mickey and Casey, are spending the night on the tiles. They don’t really have a choice. Disturbed by gardaí during the burglary of Casey’s own home, they escape onto the rooftop to wait it out, accompanied by some cheap whiskey and an ounce of cocaine. High as kites, literally and figuratively, John O’Donovan’s marginalised characters are given a poignant vantage, from where they can see things clearly, without any particular place to go.

In One Duck’s production Alan Mahon and Josh Williams play tender souls, even when they talk tough, and for all the garrulous narcotics, the play nudges at what can be expressed and unspoken in a country where social progress is unequal. That takes a quiet toll. “Things get harder to say, longer you leave it,” says Mickey. The play also knows just how invisible these two endearing strivers are, self-conscious about their romance even lurking up here unseen. But the fog is beginning to lift. Not everyone can escape a small town, and not everyone needs to, but when they look into the distance their imaginations ring them far.

The New Theatre, Dublin. Feb 7-24. 7.30pm. €16/€12.50. thenewtheatre.com – What’s the worst that can happen? It’s a question that, these days, tends to find an answer. But in Dennis Kelly’s two-hander play from 2005, it begins as an unexpectedly bad hangover, when, the morning after the office party, Louise wakes up beside work colleague Mark. That might have been bad enough, but the location conveys another horror. They are in an underground nuclear fallout shelter, to which Mark has retreated with her to escape the fallout caused by a suitcase bomb. Having Dungeons and Dragons to help them while away the time before they can safely emerge does not automatically improve matters.

Kelly, the writer behind Matilda, Love and Money, and – with Sharon Horgan – the BBC comedy Pulling, has long had a knack for merrily jabbing a finger at exposed nerves. This exploration of a wider political maelstrom through the eyes of two flawed individuals maps easily onto the upheavals of the moment. Revived from a production at the Lir and featuring the Academy’s graduates Maria Guiver and Paul Livingstone, it’s a dark moral answer to the question, what happens next?