Reaction to report of independent inquiry into allegations has been mixed 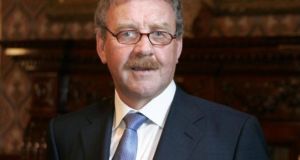 Former Gate Theatre artistic director Michael Colgan set off for the south of France as the controversy grew. He refused to comment publicly but let it be known he had hired renowned defamation lawyer Paul Tweed. File photograph: Dara Mac Dónaill.

The parts of the Gate Theatre report which were released on Friday confirm what most people in Irish theatre have long known, that Michael Colgan ran the institution as a personal fiefdom for decades, with little oversight from his board of directors.

That regime lead to many of what the report calls “credible and consistent” allegations of bullying, abuse of power and inappropriate behaviour by Colgan towards employees. It also left his accusers feeling they had nowhere to go; such was his pervasive authority in the Gate that any complaint about Colgan would inevitably come across his desk.

Stories about the theatre’s former artistic director have circulated for years in dressing rooms, backstage areas and green rooms but it was only when director and activist Grace Dyas published a blog post last October titled “I’ve been thinking about Michael Colgan lately…” that the allegations entered the public sphere.

Dyas, who had worked with Colgan in the past said he had approached her during a gathering of theatre people and said, among other things, “You’ve lost so much weight, I’d almost have sex with you”.

Within hours of the post, others started to share stories on social media. Some alleging boorishness on the part of Colgan, others making more serious accusations.

Initially the allegations were confined to the internet but they soon began to appear in the mainstream media. In November The Irish Times interviewed seven former employees who worked with Colgan in Number Eight, the Gate’s administrative building on Parnell Square.

Their allegations included frequent inappropriate touching, highly sexualised comments and workplace bullying as well as threats to fire staff members who objected to his actions.

One employee, Ciara Smyth, detailed an incident where Colgan hit her so hard on the buttocks in front of others that it left a red mark. When she complained, she said he went on to mock her in front of other staff members.

“Anyone who acted shocked or reacted badly to his comments was oversensitive, overly PC, couldn’t take a joke, etc. The Waking the Feminists movement was a source of absolute derision to him, and he dictated his correspondence to them with the relish of a man getting away with a great joke - that they were going to fall for his mawkish sincerity,” recalled Sarah (not her real name).

At least two of the women who spoke to The Irish Times made internal complaints to management which Colgan found out about. They said he confronted them and accused them of disloyalty while insisting he could run his theatre as he wished.

As more women’s stories continued to appear, including on Dyas’s blog, Gate management struggled with how to respond.

Selina Cartwell, who succeeded Colgan as director earlier in 2017, said she was concerned and upset by the allegations. It is understood she favoured an immediate apology to the women from the Gate but was advised against this.

Instead the Gate set up an email address for complaints about Colgan. This immediately drew criticism from people who questioned who would have access to the email account. At the time the Gate’s board still contained people who where there during the Colgan years.

Shortly afterwards the theatre announced it had commissioned Gaye Cunningham of the Workplace Relations Commission to carry into an independent inquiry into the allegations. She would be the only person with access to the emails, it said.

As for Colgan himself, he set off for the south of France as the controversy grew. He refused to comment publicly but let it be known he had hired renowned defamation lawyer Paul Tweed.

Two weeks after the initial allegations Colgan wrote a piece for the Sunday Independent admitting “moments where, through misjudged behaviour, I caused upset to some of my co-workers.”

He added that his behaviour “should not be equated with sexual crimes” and took issue with suggestions that he “might be guilty of more than misjudged behaviour.”

The Gate’s board, in releasing parts of Ms Cunningham’s report, finally apologised to the women in question and stated it recognised Colgan was given too much power.

“People felt unable to speak out and we accept that the Board had an onus to be more aware of the culture prevailing in the theatre over time,” it said.

Ms Cunningham stated Colgan “has a case to answer” and said the board “should consider what action, if any, should be taken, acknowledging that he is no longer an employee.”

The reaction to Ms Cunningham’s recommendations have been mixed. Many of the women who came forward about Colgan took part in the review. others didn’t citing the fact that, although nominally independent, the inquiry was still a Gate initiative.

“The Arts Council (as the trusted gatekeeper of the public purse) and the Gate Theatre prolonged and oversaw a situation where the CEO was a member of the Board of Directors, despite best practice guidelines,” Annette Clancy said.

“Some of the same directors adding their name to today’s statement were on the Board when Colgan was their colleague. The systemic issues that allowed this [HIS]abuse of power to exist remain the very same today.”

Of those who did take part, it appears most were impressed with Ms Cunningham’s sensitive and diligent approach but felt there wasn’t enough focus on the system which allowed the Colgan to operate without oversight.