Macbeth review: felled by a fatal obsession with ‘Game of Thrones’

Icarus Theatre’s production of Shakespeare’s tragedy is aimed at fans of television’s most popular swordplay-and-intrigue drama, but falls far short of its blockbuster ambitions 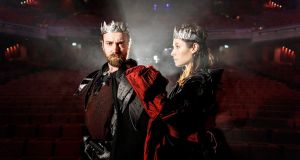 Can Shakespeare be made accessible to the Game of Thrones generation? That is the question posed by Icarus Theatre. Sadly, while Max Lewendel’s production gives us a reasonable amount of violence and plenty of ambition, it falls short on intrigue and gives us something far from truly tragic.

The huge stage at the Bord Gáis almost feels cinema-sized, which is perhaps reminiscent of the blockbuster epics Icarus wants to recreate.

Perhaps this is the central problem of the production: while it’s laudable to want to make theatre as exciting, groundbreaking, and – let’s not be snobbish – popular as film and television, Icarus are fighting against the constraints of theatre as a medium rather than working with them.

TV gives us close-ups, soft focus; you can comfortably watch long frames without dialogue. Such moments, when recreated in a large theatre, fall flat. However, given that the production will be going on tour, perhaps their retelling of Shakespeare’s tragedy will be better served by smaller venues.

Macbeth, as a drama, is incredibly focused; it is by far the shortest of Shakespeare’s four major tragedies, and the leanness of the text can often lend a visceral quality to the play in performance. Despite this usually working to a production’s advantage, the text’s abridgement has been merciless: hacked and hewn, it is yet another victim fallen on the play’s battlefield.

However, we do get the scene with Banquo’s ghost twice – before and after the interval – from different angles as we see the haunting from the perspective of the other characters. This lends an episodic quality that works with the Game of Thrones aesthetic they wish to replicate (perhaps a “Previously on Macbeth . . .” voiceover was deemed too much). Yet the resulting effect is that we move from one set-piece to the next without a real coherence of the tragic trajectory.

A production like this could work with stellar leads. But while Macbeth (James Heatlie) and Lady Macbeth (Miztli Rose Neville) are full of sound and fury, we see no intimacy.

Amongst this, Rowan Winter shines as Macduff. Her portrayal of the revenging warrior, who in this production is passionately and unapologetically female, is an inspired choice. But even this is undermined by the decision to have Macduff slain alongside Macbeth in their final showdown; it seems that women can kill the king, but not survive the transgression.

Curtis C Trout’s set design helps to impose some sense of unity. A series of abstract triangles hangs above the action, at times suggesting a dagger, sometimes Birnam Wood, but mostly evoking the crown that is at the forefront of Macbeth’s mind.

In essence, the production shares its tragic flaw with its eponymous hero: both are victims of overleaping ambition. But while Macbeth as a character finds poetry in the darkness, this production remains as hollow as the crown he seeks.

Without the Blueshirts, there would have been no Fine Gael
9