The Bull Will Come Out Tomorrow: this week's best theatre shows

A new play imagines the fractious compatibility between Ernest Hemingway and F Scott Fitzgerald, while an old musical makes a comeback for the summer 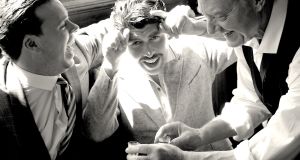 Literary scholars have long puzzled over the relationship between F Scott Fitzgerald, fastidious laureate of the Jazz Age, and Ernest Hemingway, the tough-tender spokesman of the Lost Generation. The writers were friends, but you wouldn’t know it from Hemingway’s bullying repartee, in person and print, on everything from Scott’s Fitzgerald’s literary output to his alcoholic intake. Why is it that Fitzgerald never hit back? And, if he did, which of them would win in a fight?

Playwright Eddie Naughton goes some way towards settling both questions in this imagined meeting in Costello’s, an Irish bar for New York’s 20th-century literati. It’s 1937, and while Hemingway prepares to report on the Spanish Civil War, Fitzgerald arrives urging caution. That their meeting begins with an arm wrestle suggests his advice will not be heeded. Instead, a terse Hemingway and precious Fitzgerald talk, confide, fight and push on, while the production, directed by Karl Shiels, imagines what made two outwardly dissimilar writers of their age such compatible sparring partners – at one point, literally.

During the Great Depression, a plucky little orphan  peered out from a comic strip to give solace to those on the breadline. Later, in the “malaise” years of the late ’70s in the US, the curly-haired idealist conquered Broadway, giving rousingly optimistic tunes to those queuing for gas during the energy crisis.

And now, in this uncertain pivot between boom and bust in the Brexit-limbo of our part of the world, a West End version of Annie comes to Dublin to give families something to do for the holidays. In Charles Strouse and Martin Charin’s feel-good musical, grubby-faced cherubs belt out It’s the Hard-Knock Life, billionaires enjoy pain-free adoption processes, and one irrepressible 11-year-old brokers the New Deal with President Roosevelt by promising that the sun’ll come out tomorrow. Leapin’ Lizards! A stage star scouted by a TV competition, I’d Do Anything winner Jodie Prenger takes on the villainous role of orphan-wrangler Mrs Hannigan.

The Music Quiz: Which was the first Irish act nominated for the Mercury Prize?
8