The week’s best plays: Playboy of the Western World and Faultline 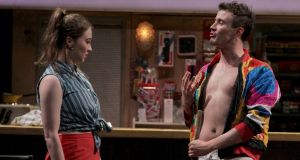 Eloïse Stevenson as Pegeen Mike and Michael Shea as Christy Mahon in The Playboy of the Western World. Photograph: Mark Stedman

The Playboy of the Western World

Few plays are quite as familiar to an Irish audience as JM Synge’s rural drama of wildly exaggerated patricide. Indeed, you could chart a fluid history of Irish theatre since 1907 through Playboys alone, from its riotous beginnings to its later status as a dusty heritage drama. We reached peak Synge in the oughts, when Druid made its association more indelible with the DruidSynge cycle, and a refreshingly vivid take that left the Abbey’s efforts overshadowed, despite a spirited, contemporary version by Bisi Adigun and Roddy Doyle. The play also rewarded experimentation, when Pan Pan brought the play to China (and back again), and, as recently as 2017, Martin McSharry imagined a version in which Christy was a contemporary asylum seeker. What does it have left to give? That depends on how you look at it, this Dublin Theatre Festival and Lyric Theatre co-production might argue, letting sharp-sighted director Oonagh Murphy bring the play again into an ever-changing contemporary setting, while sounding new emphases. Its age-old power structure persists in new guises, where a young woman’s destiny is again not hers to shape, and young people would rather create a reality to escape the one they’re given.

In 1982 an accidental pogrom hastened a significant proportion of Ireland’s LGBTQ+ community to leave their country. It began with the murder investigation of gay men in Dublin and Cork, during which Garda inquiries exposed the private – and still criminalised – lives of Dublin’s gay community to families, friends and employers. Almost 1,500 people were essentially outed by the State over the course of one weekend. Under the conservative pressures that followed, an exodus began, sending Ireland’s gay community to London and beyond, in search of safer havens. In Anu’s new co-production with the Gate Theatre, that represented a faultline, and for the families of both the murder victims and the exiles, the aftershocks are still reverberating.

Anu, which has found a vital place in Irish theatre that brings the unsettled revenants of history into the light of the present, are well placed to examine such upheaval. The new work from director Louise Lowe and designer Owen Boss is based on the material of the Irish Queer Archive at the National Library of Ireland, translated into a site-responsive performance at 11 Parnell Square. In more compassionate times, the show focuses first on a love story, before private lives were shunted into public view and history was set spinning in all directions.