We Are Lightning review: Raucous collaboration that celebrates creative spaces 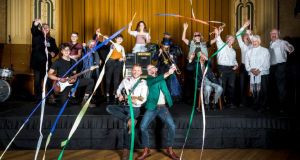 We Are Lightning: the harmony of community spirit feels invincible. Photograph: Pia Johnson

Ringside Bar, National Stadium
★★★★☆
Set on the closing night of the last music venue in Dublin – a chilling thought that the capital’s unchecked development makes easier to imagine – this cheering show is a celebration of the spaces where creativity gathers. Honey-toned singer and guitarist Sam Halmarack and ultra-enthusiastic drummer Joseph O’Farrell (JOF) may front the project, but, like the fable of the stone soup, the show is made by the raucous collaboration they attract.

Surrounded by stages, the audience pivot and cluster for eruptive teen band Zombie Dolls, performing an immensely confident first gig, the centuries-old warm brass tradition of St James’ Band, and the mingled voices of the Line-Up and High Hopes choirs. An underlying lament for community spaces supplanted by bland hotels finds sombre echoes in a rendition of Dublin in the Rare Old Times, but the tone is hardly defeated. When all musicians merge for an immersive anthem, to the refrain “We’re not giving up just yet”, the harmony of community spirit feels invincible.