Nabokov’s ‘Lolita’: What do we do with the art of monstrous men? 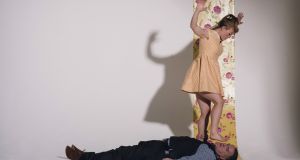 “We rarely hear Dolores’s voice. The story is written by a male writer and narrated by a male character, and they both deny her existence as a human, instead creating this fantasy being called ‘Lolita’”

Dolores Hazes is not a famous literary character. But Lolita is. When Humbert Humbert, the child rapist narrator in Nabokov’s novel, imposes his nickname on 12-year-old Dolores, he dismisses her individuality and silences her as a person. When Nabokov entitles his novel Lolita, this suppression is magnified. A new performance installation by dance company Junk Ensemble, part of this year’s Dublin Dance Festival, will give voice to the silenced Dolores and rescue her story from Nabokov’s text.

“We rarely hear Dolores’s voice,” says Jessica Kennedy, who is artistic director of Junk Ensemble along with her twin sister Megan. “The story is written by a male writer and narrated by a male character, and they both deny her existence as a human, instead creating this fantasy being called ‘Lolita’. Humbert wants to remould her and rewrite her history. He wants to turn her into a woman but keep her as a child.”

Dolores will create another fiction, based on how she would act if she had lived. Would she be angry or scared or traumatised?

“Definitely traumatised,” Kennedy says. “This is a tale about trauma.”

Reinstating her real name Dolores (meaning sorrow) instead of Lolita (since coined to denote a sexually precocious young girl) is an important starting point. “It signals that we are wary of the source and questioning the narrative.”

I first read the novel when I was 17, and was overcome with the poetry of the language. I missed the severity of the trauma and abuse

“This pairing of the male characters is important, because we see them as one person,” Megan Kennedy says. “Nabokov often references the double in his novels through shadows or mirrors. In the novel both are hebephiles preying on a young girl.”

Led around the Chocolate Factory in these performances of Dolores, the audience’s gaze will be controlled and framed within intimate enclosed spaces.

“We want the audience to have a visceral reaction,” says Megan Kennedy. Each episode will be different and the viewer will not only see, but smell, hear and, if they are too close to a flailing arm or stray leg, feel the performances. This physical experience is at odds with the comforting language of the book.

“I first read the novel when I was 17, and was overcome with the poetry of the language,” says Jessica Kennedy. “Re-reading it later I realised how much I missed. I missed the severity of the trauma and abuse. I was seduced by the language and the descriptions of the place. Seduced by an imitation of love. Re-reading it, the realisation that I had missed a lot of that was quite hard to face.” Nabokov claimed that his novels needed to be read eight times, and repeated readings reveal many hidden layers.

“Having done several close readings for this production, we’ve discovered how he gives us lot of hints,” says Amanda Coogan. “Dolores accuses him of raping her at one point. But it’s a tiny moment and quickly we are back to Humbert’s poetic longing and projections.”

Megan Kennedy read the book when she was 19 and was also seduced by the language.

“It is full of metaphors and layers,” she says. “And I’m still not sure if it is Nabokov trying to show off his use of language or if it is the narrator Humbert. There is a bit of a dichotomy going on. On one hand Nabokov tries to distinguish himself from Humbert and at other times he keeps putting himself into the text. Humbert’s narration is also Nabokov’s text.”

Hebephilia – sexual attraction to pubescent or early adolescent children – is also found in a novella called The Enchanter that Nabokov wrote 16 years before Lolita, as well as in the 1926 short story A Nursery Tale and the 1932 novel Laughter in the Dark.

“Lolita is an obvious artwork to re-appropriate from the perspective of women,” says Coogan. “Issues around male power and consent are still potent today, like in the recent Belfast rape trial.”

Also, the historical distance is no excuse.

“Some could claim that the book was written in 1955 and they were different times. That it could be accepted then,” says Megan Kennedy. “But it could never be accepted. A 12-year-old cannot give consent.”

Interrogating these past works is timely.

“We are at a moment of reconsidering great artworks, re-reading them through a 2018 feminist lens,” says Coogan. “It’s changing how we view, for example, Woody Allen’s Manhattan or Roman Polanski’s work. The list is growing daily.”

By reading Lolita, and forgiving the abuse for the sake of the poetry, we become complicit in the abuse

Claire Dederer’s essay for the Paris Review, “What Do We Do with the Art of Monstrous Men?”, sparked debate about how to deal with these art works and the wider issue of ethical art. “Flooded with knowledge of the maker’s monstrousness, we turn away, overcome by disgust. Or . . . we don’t. We continue watching, separating or trying to separate the artist from the art. Either way: disruption. They are monster geniuses, and I don’t know what to do about them,” Dederer writes.

For some the solution is complete removal, like Ridley Scott cutting Kevin Spacey out of his movie All the Money in the World and replacing him with Christopher Plummer. In other cases the solution is more ambivalent: after artist Graham Ovenden was convicted for indecent assault against children, the Tate removed his prints from its website, but they can still be viewed by appointment. Mostly, the art of monstrous men is still viewed as before. Dederer says that she won’t watch Woody Allen’s Manhattan, but won’t give up Roman Polanski’s movies. So what responsibility is on the audience or reader? By overlooking the deeds of monstrous men do we also, as Dederer claims, become monsters?

“By reading Lolita, and forgiving the abuse for the sake of the poetry, we become complicit in the abuse. And essentially become abusers,” says Jessica Kennedy.

Dolores runs until May 13th at Chocolate Factory, as part of the Dublin Dance Festival. More information dancefestival.ie