Ruth Negga as Hamlet: Outsiders are in at the Gate theatre 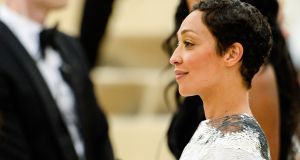 Ruth Negga: the Oscar-nominated Irish actor will play ‘Hamlet’ at the Gate theatre

Director of the Gate Theatre Selina Cartmell today drew a line under six turbulent months at the theatre, to look forward towards a number of productions for the rest of 2018, including Oscar-nominated actor Ruth Negga playing Hamlet.

The shows are themed around a concept of “the Outsider” and are an eclectic mix that seeks to continue to refresh the vision of the long-established Dublin theatre, with shows from a world premiere of Roddy Doyle’s The Snapper to the return of the Gate’s hugely successful immersive version of The Great Gatsby over Christmas.

Cartmell , the acclaimed theatre director who took over at the Gate shortly before a rash of allegations about its former director Michael Colgan erupted, spoke frankly about the period since then, praising those who spoke out about their experiences and saying “their courage is not to be underestimated”.

She said she has “reluctantly come to accept that a culture that existed here for many years cannot be dealt with, and certainly cannot be resolved, in a matter of months. But I assure you, no matter what it takes, that we will we will do everything to bring closure to these matters.”

Acknowledging the theatre has been through a difficult period, she said “over the last six months a lot of reputational damage has been done to the Gate”.

But she pointed out: “I also have to ensure that the great legacy of the Gate continues and its future is safeguarded. This will only be achieved by producing the right theatre, and one of the most ingredients of this is to have a great audience.”

In announcing productions for the rest of 2018, the theatre’s director said “today is about emphasising my commitment to leading the Gate Theatre forward with values of trust, transparency and equality – a creative safe space where artists can collaborate and make their best work for our audiences.”

Cartmell was speaking on the stage of the Gate auditorium, a petite powerhouse on the exuberant set of her current show, Assassins, after an exhilarating presentation of its rousing finale. Stephen Sondheim and John Weidman’s Tony-award winning musical Assassins, an entertaining, skilful show directed by Cartmell, will finish on June 6th.

Rehearsals have begun for the Gate’s next production, the world premiere on June 14th of The Snapper. The stage version of Roddy Doyle’s second instalment of the Barrytown Trilogy, would make it “a very special summer”, she said, with Doyle’s “warm, frank and wickedly funny account of family life in Ireland in the 1980s”.

Cartmell hopes it will “open the Gate to audiences who perhaps have never been to this theatre before. This will bring The Snapper back home to where it all started, to the Rotunda hospital where The Snapper was born.” The cast includes Simon Delaney, Hilda Fay, Simon O’Gorman, Kate Gilmore, with Lir acting graduate Hazel Clifford playing Sharon, directed by Roisin McBrinn.

The production of Hamlet, as part of Dublin Theatre Festival, and coinciding with the 90th anniversary of the Gate on October 14th , draws a line back to the theatre’s legacy of Micheal MacLiammoir and Hilton Edwards – in the early years Hamlet was one its most revived Shakesperean productions and it toured all over the world – but also marks a break from tradition in what Cartmell promised would be “a groundbreaking production”.

Hamlet is “is the ultimate outsider, the dilemma of whether to be or not to be has held us in its thrall for centuries,” said Cartmell.

Ruth Negga plays the title role, and “Ruth’s transformative power as an artist will capture the humanity, humour, pain and multi-layered complexity of one of the most demanding roles for any actor,” she said. The production, running for six weeks from September 21st, will “hold up the mirror” to these extraordinary times.

For the Christmas season, Cartmell plans to “end the outsider season as we started” with a return by popular demand of its acclaimed immersive production of F. Scott Fitzgerald’s The Great Gatsby, “which will take us swinging into 2019. Once again we will be removing the seats from the auditorium and transforming it into Gatsby’s mansion.”

Audiences will roam stage, backstage, green room, hospitality and studio space, up close to the action.

Marking a turning point for the Gate, Cartmell thanked the Arts Council for its support and ongoing partnership, and commented “in 1933 Hilton Edwards said ‘we are a bunch of up-starts, uncomfortably progressive and intensely alive. We are bound to advance.’

“The Gate needs to tell stories that are alive, intensely alive, stories that have the power to have a long-lasting impact, to build a community, to ask the big questions of who we are and where we are going in the world.”

She plans to “continue to explore the journey of the outsider, disenfranchised voices that live on the margins, the dispossessed, the mad, the discarded, fighting against power and conformity in a search for answers”.

In a statement indicating where she hopes to lead the theatre after a stormy period, Cartmell asked “Why is theatre important, and how can it have an impact on our lives? How can it transform us and why? These are some of the questions at the core of how the Gate thinks and behaves, and how it can transform itself as a beacon, a catalyst of social and cultural change and artistic innovation, and these principles and values will guide us.”

The movie quiz: ‘Jaws’ appeared in how many James Bond films?
3

Versatile Dublin rappers: I'd like to thank all the smack heads on Abbey Street
7