‘Seahorses live a radically feminist lifestyle. They have it sorted’ 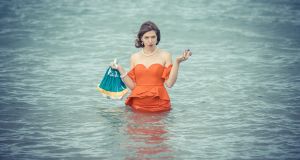 Christiane O’Mahony in ‘Seahorse’: ‘I thought, this would be a fun way to examine the anxieties of modern womanhood in Ireland: all the awkwardness, all the expectations that fall upon you’

A sea horse may seem an unlikely feminist icon but, for Mara, the marine biologist at the centre of Christiane O’Mahony’s new play, sea horses offer the solution to many of the problems of gender inequality today. As Mara struggles to reconcile her career with her desire to be a mother, sea horses seem to have the problem sorted.

O’Mahony, fresh from rehearsals in Ballymun’s Axis Theatre explains: “Sea horses live a radically feminist lifestyle, really. The females carry the eggs, but they implant them into the male sea horses. So it is the males who have to give birth. Female sea horses have this amazing way of living that would solve a lot of the problems that I certainly feel as a woman; the dilemma you face as you head into your 30s about the sacrifices you might have to make if you want to be a mother. When you are younger, you think everything is possible, but as you get older you realise, actually, you have a lot less time to do the things you want than you first think.”

O’Mahony first began to conceive of the idea for a play based around sea horses while she was performing in another one. O’Mahony is an acclaimed musician as well as an actor and comedian, and she was playing the harp in Phillip McMahon and Raymond Scannell’s chamber musical Town is Dead, at the Peacock Theatre.

“I probably shouldn’t say this,” she jokes, “as it makes me look like I wasn’t paying attention to what I was supposed to be doing, but I was, literally, sitting on stage, playing, when the idea struck me about a woman who wanted to transform into a sea horse.

“The more I thought about it the more I thought, ‘yeah, sea horses have it sorted.’ I couldn’t let the idea go. I thought, ‘this would be a fun way to examine the anxieties of modern womanhood in Ireland: all the awkwardness, all the expectations that fall upon you.’”

Transformation is something that has defined O’Mahony’s own life. An accomplished musician by the time she sat her Leaving Cert, she achieved straight-As in the State exams, before deciding to study psychology at university. After graduation, she enrolled in a full-time acting degree at Trinity College.

When that course was finished, she launched a career in stand-up comedy, achieving acclaim in Ireland and the UK with self-deprecating sets that also showcased her skills as a harpist.

For O’Mahony, these various interests and achievements are inter-related. Seahorse, she says, is really a “coming together of those skills.”

“I think I was drawn to psychology,” she explains, “because I was interested in people, but [the degree] was academic rather than practical.” After graduatiing, she “was drawn to acting because it was about people in a very practical way: you are working collaboratively with a group of people and you get to explore human behaviour when you are trying on other characters.”

The disciplines were complementary in some ways. During her psychology degree she “learnt to ask questions, approach things critically”, but with acting “you actually have to step in and find your answer by doing”.

Comedy is so uncurated. You are flung out into so many different types of environments

When O’Mahony finished her acting training, she started performing as a stand-up comic. “I suppose I expected when I graduated that I would be busy. That I would specialise in one type of acting or another. I had always been interested in writing, but I was a bit afraid of it. Studying can do that: ‘well, I actually trained in this, so I can’t just turn my hand to that.’”

Stand-up allowed her to write in “a less formal, more unstructured way”, and delivering her routines live allowed her to develop her instincts as a performer. “Compared to theatre”, she says, “comedy is so uncurated. You are flung out into so many different types of environments, and there is a lack of predictability about the audience. It could be a bunch of tourists or a hen party or students, and all of those people will receive the [material] differently. So, in some ways, you can’t plan it or rehearse. You are there, and the audience is your scene partner.”

Stand-up is also, she says, “an immediate art. You have an idea, and you can try it out that night. But the feedback can be brutal. If the audience doesn’t like something, you die, and that really toughens you up.”

After considerable success in Ireland and the UK, O’Mahony decided to start writing for the stage in a more traditional context. “There seemed to be something more protective in the protracted development process of the theatre,” she says. “It felt like a safe space. The thing about comedy is that you don’t have the space to explore things beyond the surface.”

Writing a more traditional play would allow her to use comedy in a deeper and darker way. “I could basically write a play that would explore the existential crisis of a young woman in Ireland today. But I couldn’t do that in comedy.”

Theatre, O’Mahony has decided, is also a lot less lonely than the world of stand-up comedy. “Even though I am the only cast member in Seahorse, there is a team of 10 involved in creating the show, so its a real collective venture.”

Indeed, with the input of her colleagues, the work has changed considerably since she first conceived of it, sitting in the dark on stage at the Peacock.

“Writing a play is a bit like making a dress,” she concludes. “And putting it on stage is like trying it on. You have to keep making changes as you are wearing it, to make sure it fits right.”