David Adams brings a broad church to his papal celebration 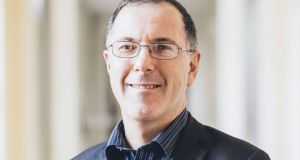 The opening work in David Adams’s wide-ranging organ recital at St Michael’s Church, Dún Laoghaire, on Sunday was the key link for most of what followed. Adams included the Marche Pontificale from French composer Charles-Marie Widor’s First Organ Symphony. The work was written in 1872 and the march movement may have been inspired by the sight of Pope Pius IX, the longest-serving pope in history, being carried in procession.

He ended with a second excursion to France, this time in memory of fellow organist Peter Sweeney, who played many times at St Michael’s, and who died earlier this year. Henri Mulet’s Tu es petra, from the Esquisses byzantines he wrote between 1914 and 1919, is just the kind of flamboyant display that Sweeney so relished as a performer.

Adams chose to present the evening’s biggest piece, Ginastera’s 1980 Variazioni e toccata sopra Aurora lucis rutilat, in three parts, and also split up his excerpts from Kagel’s Rrrrrrr . . . (Raga, Rosalie and Ragtime-Waltz, from a set in which all of the titles begin with the letter ‘r’).

This way he created 10 musical offerings, all eagerly entertaining, some with an almost embarrassing embrace of kitsch, with the Ginastera taking a wryly modernist stance and Kagel taking an almost gleefully mechanistic approach to resistant musical materials.

It was, as most of Adams’s Dún Laoghaire appearances have been, an evening of wonderfully varied, subtle virtuosity. As to the cumulative statement he might have been making about the pope, the Catholic church (of which he is not a member) or the national musical characteristics of Argentina or Italy, that is anyone’s guess.

August is mostly an unexceptional month for orchestral concerts. The RTÉ Concert Orchestra holds the Tuesday lunchtime slot while the members of the RTÉ National Symphony Orchestra are on leave, and steer clear of classical repertoire in their evening concerts.

The Tuesdays are often used for rewards and tryouts. Soloists and conductors who have won engagements through competitions, and others who are given an airing to test their suitability for future work, are mixed and matched with more experienced colleagues.

The dream of the engagement that kick-starts a starry new career still lives on, not least because there are so many true stories to support it, though I’m not sure any of the ones to have come out of Ireland actually launched careers by Irish performers.

To my ears the most interesting of the younger conductors was the one with the least professional experience, Paul McCusker, winner of this year’s ESB Feis Ceoil conducting competition. Although his formal university studies were in biology (followed by post-doctoral research in molecular parasitology) he did study music from a young age, and conducted the Queen’s University Symphony Orchestra when he was at college. He’s now studying conducting at the Royal Conservatoire of Scotland.

There was a natural joie de vivre about his work with the Concert Orchestra, a sense not just that he belonged in front of an orchestra but that he knew he belonged there. His programme was mostly outgoing and, though there were issues about his care with internal balancing, he is clearly a talent worth watching. His soloist on the day was the ardent tenor Paul McNamara.

Killian Farrell was a teenage phenomenon at home in Ireland for a couple of years and is currently working as assistant to the music director at the Theater Bremen in Germany. His sense of orchestral colour and texture is highly developed and was put to good use in Ravel’s Mother Goose Suite.

McCusker’s showpiece marked the Leonard Bernstein centenary with the composer’s high-energy Three Dance Episodes from On The Town. Farrell chose Chabrier’s Fête Polonaise, a 19th-century dance that’s so littered with effects of what you might call rubber band rubato that its festive spirit is not easy to unlock fully. Farrell didn’t quite bring it off on this occasion.

There was a recurring issue of pulse control in his work with the RTÉCO through which successive downbeats tended to arrive earlier than they were due. It’s as if his rhythmic control does not keep the players consistently in line and they move minutely ahead of where they need to be.

Farrell’s soloist was soprano Jennifer Davis, whose withdrawal from Wexford Festival Opera was recently announced on the basis that, since being cast, “her voice has developed, and the role is no longer suitable vocally”. Certainly, her more imposing approach to Mozart and Delibes was not what I would have expected on past form. On the other hand she seemed fully comfortable under the greater pressure of Dich, teure Halle, from Wagner’s Tannhäuser.

And in the remaining concert, Gavin Maloney, an experienced workman much favoured by RTÉ in lunchtime and new music settings, showed solidity in Glinka, Rachmaninov and Khachaturian. His soloist, young Cork pianist Kevin Jansson, was equally at home with the sparkle of Shostakovich’s Second Piano Concerto.

The best conducting I heard in Dublin during August, however, came not with the RTÉCO, nor even with the Baltimore Symphony Orchestra’s bright Bernstein celebration under Marin Alsop. The star was the meticulously illuminating Stéphane Denève, taking the orchestra of the Colburn School Conservatory of Music in Los Angeles through their paces in works by Esa-Pekka Salonen, Barber (the Violin Concerto with the finely controlled Simone Porter), and Rachmaninov.