On Ice review: A poignant show that lightly skates over millennia

Dublin Fringe Festival: This one-woman show is performed with aplomb on ice-skates 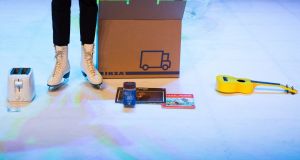 On Ice: Grotenhuis performs on an ice rink, surrounded by her life’s possessions. Photograph: Jeroen Broeckx

Peacock Stage, Abbey Theatre
★★★☆☆
Anxiety about climate breakdown underpins an intriguingly constructed performance by Dutch theatre artist, Suzanne Grotenhuis. Through false starts and carefully controlled digressions, she sets out to explain why she spent the proceeds of a theatre prize on a portable ice-rink. Performing with aplomb on ice-skates, she is surrounded by her life’s possessions: 19,475 of them, boxed around the edges of the ice-rink.

Choosing what to preserve from her past prompts a segue to the Golden Record, sent into space with the 1970s Voyager mission, recording life and culture on earth. When the human race has to decamp to Mars in the future, her ice-rink might serve as a reminder of the changing seasons on the Earth they’ve left behind.

Poignant if overextended, this solo reflects on one individual’s place in the world, and beyond that, the Earth’s place in the universe. Her question typed into Google – “what next?” – is not as random as it seems.

The Mystery of Charles Dickens: A strange life led in the public eye
6

TV Guide: 29 of the best shows to watch this week
9