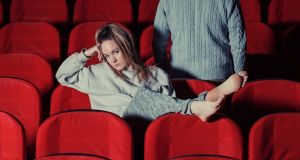 Anna Shiels-McNamee takes an unusually wry view of the process of going blind.

What happened on March 13th, 2012? In an absorbing experiment, both arch and obsessional, the theatremaker Dick Walsh makes it his mission to know. “I’m like an actor who spent years studying Hamlet, except it’s newspaper articles,” says his onstage accomplice in digesting all available news stories, Shane Connolly, who comes off as the most wired and rangy performer this side of Nicolas Cage.

Walsh has made fascinatingly weird shows before about how our world is mediated. Co-directing this time with the comedian James Moran, he stealthily challenges the authority of journalism, theatre and expertise, more in sorrow than in anger. If you shouldn’t believe everything you read, where does the truth reside? Against Brian Walsh’s excellent jazz drumming, a nod to the then-fading Occupy movement, they revive a German pension squabble with a hysterical din, discuss the maddening ambiguities around a Syrian massacre or, conversely, deliver deadpan reportage of a US soldier’s killing spree with a frenzy of movement. Through it all Walsh nudges playfully and sincerely at the instability of conviction and certainty. All this happened, more or less.

Anna Shiels-McNamee takes an unusually wry view of the process of going blind in her award-winning show from 2018. Premiered on the Dublin Fringe and now revived for a national tour, My Dad’s Blind is based on her own experiences with a father who lost his sight in adulthood. Growing up, Shiels McNamee was surprised to find people telling her how amazing her father was, which didn’t quite square with her impressions of a regular dad with a 9-5 job and a fondness for watching Coronation Street. If it was a sentimental response to his blindness, her response here is to strip away pat interpretations with a depiction both abrasive and comic, in which she both cares for and argues with her father, while they contend with the challenges of the sighted world and a guide dog that has just had a stroke. Developed with contemporary theatre grandees Pan Pan, the play is a jumble of plot developments, striking visuals and confessional audio recordings, a frank and funny account of losing sight that is stimulating to witness.