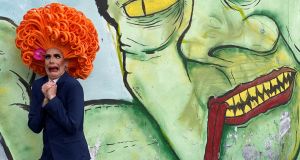 Abomination: A DUP Opera actor Matthew Cavan as his drag character Cherrie Ontop in front of a Belfast mural of the DUP leader Arlene Foster Abomination.

The Democratic Unionist Party is having a bit of a moment. One day its MPs are the potential kingmakers, the next the wreckers of Boris Johnson’s Brexit deal.

Meanwhile, back at Stormont, its MLAs have time on their hands as the slumberous Northern Ireland Assembly clocks up over 1,000 days of inertia.

They were briefly galvanised into action on October 21st, the day on which laws permitting same-sex marriage and abortion were scheduled to take effect. At the 11th hour the Assembly was recalled and, setting aside things Brexit, the DUP’s big guns came out in force in a vain attempt to block proceedings.

Now, with extraordinarily apposite timing, the party is to play the lead role in an entirely different public arena. Abomination: A DUP Opera is the brainchild of Conor Mitchell, artistic director of the mould-breaking Belfast Ensemble. It will premiere at the Outburst Queer Arts Festival next month.

Its provenance is a live exchange in June 2008 between BBC Radio Ulster presenter Stephen Nolan and Iris Robinson MP. It took place on the day after her husband and party leader Peter Robinson was appointed first minister of Northern Ireland.

In a previous interview with Nolan, she had declared homosexuality to be “. . . an abomination”. Some weeks later, a gay man from north Belfast was the victim of a vicious homophobic attack.

Nolan invited Robinson back to the programme to question her about whether she felt her words had influenced the attack and how she would define the word “abomination” in this context.

Her uncompromising, unapologetic response, which included the offer of psychiatric services to repentant homosexuals, forms the framework for the opera.

The libretto is entirely constructed upon verbatim quotes from Nolan and Robinson, as well as other prominent party members like Ian Paisley Jnr and the Rev William McCrea.

Mitchell heard the interview shortly after returning to Northern Ireland from London, where he had been working successfully for a number of years. He came in search of solitude, space, a nice view and a grand piano and found that place in the countryside of his native Co Armagh.

With a handful of prestigious commissions in his back pocket and buoyed by a warm sense of homecoming, life was sweet.

If you give licence to these words, where does it stop? Is it the job of artists to call it out?

“Those words struck me like a blow in the solar plexus,” he recalls. “I found what she said overwhelmingly depressing. It unleashed a storm of controversy, with far-reaching implications. In the debate that followed, someone questioned whether gay people had souls.

“It felt like coming back home had been a huge mistake. In my self-imposed isolation, it ate away at me and I started to drink. I almost drank myself to death. After a long and painful struggle, I came through and have been sober now for five years. There’s a bit of music in the opera where an angel descends. It represents that low point in my life; there’s a chaos in it that was written straight from the heart.”

Abomination started life as a 15-minute pop-up opera at last year’s Outburst. Now, thanks to a commission from the festival and funding from the Arts Council of Northern Ireland, the British Council and the Paul Hamlyn Foundation, it has reached full production.

With a delicious sense of irony, rehearsals are taking place in the heart of loyalist east Belfast, inside a church surrounded by paramilitary murals, red, white and blue bunting, Titanic iconography and Union flags. In the room, Mitchell is a bundle of energy, the natural performer in him interacting with his cast, breathing life into every beat of his spoken and sung libretto.

“I had always wanted to look at the Iris Robinson speech,” says Mitchell. “Her life is operatic in scale; there is an operatic tragedy about her. Last year’s pop-up had people queuing out the door.

“There’s a degree of nervousness about what it is. We’ve had a few little tussles along the way. The way our society is, there’s an element of not wanting to offend or to be seen to be taking one side. No matter how you frame this, it’s always going to be seen as anti-DUP and it’s not. It’s just anti-hate speech against gay people. It just all happened to be by the DUP. It’s political theatre.”

Mitchell’s research went back 20 years. He discovered that, while its views may not have changed, the party has become more sophisticated in the way it presents and expresses itself.

“The year 2008 was, I think, a tipping point for the party. Peter Robinson becoming first minister was the seismic move away from Ian Paisley and the influence of the Free Presbyterian Church. They were suddenly dressed better, they were all a bit Blairite. It was as if they had all started drinking cappuccinos. And then the very next day, Iris goes on the radio and says this.”

“There’s a party line now, as if they got together and decided to formalise their language on this issue. When they’re talking in the House of Commons or in Stormont, they use religious language and throw around the word ‘equality’ a lot. But then they will casually say things like ‘Peter will not marry Paul’; ‘they’re poofs’. And you realise they are talking about you.

“Hopefully it will open up a conversation. Plays in Northern Ireland are a bit unpolitical at the minute, as if anything that has a political edge might be alienating. I think it’s the reverse. We are a really engaged country. For years we produced vibrant, interesting theatre that was about things. Being safe is a dangerous place to be because we just keep looking to nostalgia.

“If you give licence to these words, where does it stop? Is it the job of artists to call it out? These are government ministers, people who run the country. If they can say things like that, what else can they say? This time the target is gay people. Who’s next?”