How It Is (Part 2): Beckettian murmurs in the existential mud 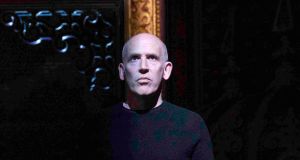 How It Is (Part 2): Conor Lovett in a continuing exploration of Samuel Beckett’s prose. Photograph: Claire Keogh

Everyman Theatre, Cork
★★★★☆
There’s a quod-erat-demonstrandum finale to Gare St Lazare Ireland’s continuing exploration of Samuel Beckett’s prose in the world premiere of How It Is (Part 2), produced with the Coronet Theatre in London.

As a reminder of schoolroom geometry, the QED sidles into the suddenly dark, suddenly silent conclusion of an experience that can be described although variously interpreted. The sense of impact in which demonstrable significance seems on offer dissolves as the lights come up; what begins in the afterglow is a threading together of a formula. Our search stems from Beckett, and, inevitably, conclusion is the wrong word, for what is ended is not over.

As with How It Is (Part 1), last year, there is a murmur in the existential mud from which the voices emerge: Stephen Dillane’s professorially conversational and indifferent, Conor Lovett’s desperately questioning, both introduced by the tenor Mark Padmore with Schubert’s Die Leiermann.

Most of what’s going on is an anatomical induction to the methodology of murder, as the characters try to rid themselves of the human adherents who suck them into the embracing effluent

In German this is a salute to the street musician to whom no one is listening but who lets everything go on as it will. Most of what’s going on is an anatomical induction to the methodology of murder, to the muscular requirements of torture, as the characters attempt to rid themselves of the human adherents who suck them into the embracing effluent.

Although murder is the option, the intricacies of thought and recall allow some remembered tenderness; silent after singing, Padmore prowls the set, where the enduring dilemmas of time, supposition and actuality bring all three players to the prompt desk as if looking for a missed cue to their continuing lives.

Director Judy Hegarty Lovett’s staging, built across the auditorium from the circle to the proscenium arch, glitters, with oriental ornamentation caging the Irish Gamelan Orchestra under composer Mel Mercier. The rhythmic achievement of verbal memory is accentuated by the Gamelan’s unison of drone and discordance while its squatting instrumentalists sway like galley slaves driving a vessel on to ground.

Although the offing brings us close to a ceiling of azure sky with golden clouds, we understand there is no safe harbour. QED.