Compostela review: Pilgrimage of self-discovery in the wake of social change 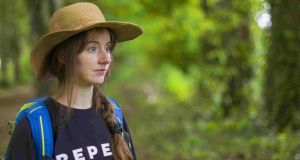 Compostela: a fry cry from triumphant photo ops and an important part of the wider story. Photograph: Eoin Madsen

The New Theatre
★★★☆☆
Focusing on activist burnout after the abortion referendum, Compostela is a departure from recent “Repeal” productions. The play’s central character, played by Miriam Needham, embarks on the 300km Camino walk. This manifests as an embodiment of activist burnout and post-referendum fatigue. It is a far cry from triumphant photo ops in Dublin Castle and an important part of the wider story.

Needham presents the audience with a varied cast of characters that pepper this simple set. Although at times the production feels underdeveloped and under directed, it is Needham’s physicality that partially overwrites those concerns. The minimalism of the set highlights the deterioration of Needham’s body throughout the performance. Her broken gait and slumped posture show the passage of time and the toll this journey is taking both mentally and physically. This is a pilgrimage of self-discovery in the wake of social change and we, the audience, are along for the journey.

Runs as part of the Dublin Fringe Festival until Saturday, September 14th