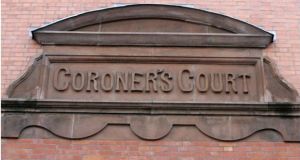 Under the new law a coroner is empowered to direct production of relevant evidence. Photograph: Dara Mac Dónaill

Landmark legislation to make inquests mandatory in all cases of maternal deaths has been passed by the Oireachtas four years after a Bill was first introduced.

The Coroners (Amendment) Bill will require mandatory reporting and inquest into any death occurring in State custody or detention.

And a coroner must be informed of all stillbirths and deaths of children during labour and birth, which may result in inquests.

Welcoming the passage of the Bill, Minister for Justice Charlie Flanagan said it would “significantly clarify, strengthen and modernise the powers available to coroners in the reporting, investigation and inquest of deaths”.

The Minister concluded “It is my firm intention to seek early enactment, and provide for rapid commencement, of the Bill.”

He said the legislation dealt with key questions in a number of high-profile cases of maternal deaths and perinatal deaths that should have been reported to coroners “because they raised issues of medical error and were unnatural deaths under the 1962 Coroners Act, but were not so reported”.

Family members of a number of the women whose deaths became high profile cases, watched from the visitors’ gallery as the Bill was passed.

The Minister said “bereaved families, and in some instances even coroners, experienced considerable difficulty in obtaining basic information that should have been provided to them. That was, and is, unacceptable”.

Provisions include “wider scope for inquiry at inquests, clarifying that they are not limited to establishing the medical cause of death, but that they may also seek to establish, to the extent the coroner considers necessary, the circumstances in which the death occurred.”

Under the new law a coroner is empowered to direct production of relevant evidence, enter premises to obtain relevant records, secure attendance of witnesses at inquest, and compel witnesses to answer questions at the inquest.

In an unexplained hospital death the coroner will be empowered to direct the facility to provide the medical records of the deceased in time to inform the coroner’s post mortem examination.

The changes “ensure clarity for responsible persons, including hospital authorities, and will support the development of transparent and accountable oversight for checking and investigating certain types of death”

He added that “most importantly, they will support timely and transparent provision of information by health and other authorities to bereaved families”.

The Minister paid tribute to former Independents4Change TD Clare Daly, now an MEP, who campaigned for mandatory maternal inquests since she was first elected to the Dáil in 2011 and who introduced a private member’s Bill in 2015. Its provisions were reflected in the Government’s legislation.

Mr Flanagan also paid tribute to his predecessor former tánaiste Frances Fitzgerald, now an MEP, who he said was committed to ensuring that the Bill would fully address all the issues on maternal deaths.