Comments follow judge’s dismissal of five €60,000 claims and referral of cases to DPP 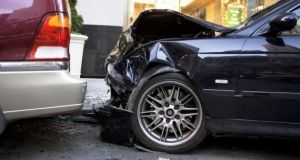 A judge has dismissed five fraudulent damages claims for up to €300,000. Photograph: Stock image

A Minister has called on the legal profession to warn its members that fraudulent cases will not be tolerated.

Michael D’Arcy, the Minister of State with responsibility for the insurance sector, said solicitors should be vigilant about the cases they take on and judges should be encouraged to speak out about cases that come before them.

His comments come after a circuit court judge said on Wednesday that solicitors who handle cases which involve staged accidents or exaggerated claims may be contributing to fraudulent personal injury claims,.

Judge Jacqueline Linnane was speaking after she dismissed five insurance claims and directed that files relating to them be forwarded to the Director of Public Prosecutions.

The cases involved five claimants, all of whom usually reside in London, who had claimed €60,000 each in relation to alleged whiplash injuries they claimed to have suffered four years ago in Dublin.

The judge said some solicitors should be more selective about which clients they accept.

“Maybe fuller inquiries should be made by solicitors before they take on these cases but I will leave it to RSA [the insurance company involved] whether they wish to instruct their legal representatives to bring it to the attention of the law society,” the judge said.

The chief executive of Insurance Ireland, the lobby group for the sector, called on the legal regulator to take action.

In a statement, Kevin Thompson said “it is not acceptable for any regulator to sit back and await notification to act.

“We call on the Law Society, as regulator of the legal sector, to proactively carry out themed inspections of personal injury solicitors. This would be the norm for any independent regulator in any other sector to ensure compliance. We do not believe in the principle of self-regulation for any sector.”

Mr D’Arcy said in the main, solicitors are vigilant. “But some aren’t. That’s just the fact. It’s a matter for the judge to make a determination on the veracity of a claim.

Mr D’Arcy emphasised he was speaking in a general sense and not about any specific case.