Skin: On My Culture Radar 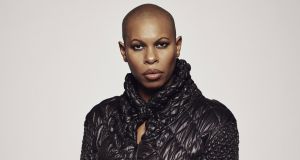 Skunk Anansie singer Skin: “I’m a gadget freak; everything in my house from the curtains to the lighting is voice controlled.”

Milkman by Anna Burns. Some people have found it difficult, but I cheated and read it as an audio book. The woman who narrated it [Bríd Brennan] spoke in a thick Irish accent and read it beautifully. It gave such an interesting insight into being Northern Irish during the Troubles. Like, even a badge on a British-made car raises suspicion. It was especially interesting as a Black British person from Brixton, because in many ways, we have our mentality which is similar but with a black spin. I identified with a lot of things that happened in the book.

I love a five-star restaurant, like I go to The Fat Duck a couple of times a year and do the tasting menu with wine pairings, just to see the face of the people who I bring with me. But my favourite restaurant is a local yokel: The Morgan Arms in Bow, where I live. It’s an unfussy bistro bar, but they add frills where it matters. You don’t want stupid napkins, you want a big plate of tasty food, served by nice people who seem to like their boss.

I’m a sucker for an American black comedian. I like Chris Rock, he has an intelligent spin on so many normal things. I really like Tiffany Haddish because she’s like a hometown kinda girl. It changes all the time, but right now, Tiffany is my queen.

Recently I saw Misty by Arinzé Kene. It was one of the best things I’ve ever seen, and I do a lot of theatre. Brilliant, simple ideas but quite funny and quirky, and the production was ingenious too. It’s about a south London black guy who does a lot of soul searching because he’s writing a play, so he hears people’s opinions on who he should be, how commercial he should be, how black he should be. I love Tina: The Musical too, I’ve seen that a few times.

I’m high-low with fashion designers. I’m a McQueen person and what [creative director] Sarah Burton is doing is just stunning. I really like the Westwood-Burberry collection, that’s really fun. And there’s a new Italian designer out called Micol Ragni, who’s just graduated as a student. She’s influenced by Westwood and McQueen but I think she’s going to develop her own look and be really amazing.

I’ve had Control on repeat, which comes from Cid Rim’s album Material. It’s part of the jazz revival in some ways, but on the electronic side. Often with electronic bands, no one between them can actually play an instrument, but with every Cid Rim track, you can hear the musicians have full command of their instruments. The drumming is astonishing.

I’ve gotten to like New York as I visit my other half, Ladyfag, there. I fell in love with Hudson, although that’s more like a town. Everyone was so nice and genuine, it’s somewhere I could live. Williamsburg is a bit gentrified now. I like the clubs in Brooklyn. Ladyfag puts on fun nights: she has a festival, LadyLand and another night called Battle Hymn. They’re they best things in New York right now.

I really like Domhnall Gleeson. Oh, he’s Irish isn’t he? I see him in so many things. About Time is a cute little love story that’s really weird, I adored him in Ex Machina, I really enjoyed his performance in Frank. He’s very good at playing the understated but controlled characters, and if he’s in a film, you know it’s going to be good. I’ve loved Olivia Colman for many years, she’s been in so many good things and I’m glad she’s getting her Oscar moment.

My favourite is Colin Murray’s Blood on the Tracks. I’ve been on it so I’m a bit biased there, but he’s very natural and funny as a presenter. He brings a bunch of people from all walks of life. I was listening to one the other day with Michaela Coel of Chewing Gum, the poet Benjamin Zephaniah, and Bez.

I’m a gadget freak; everything in my house from the curtains to the lighting is voice controlled. My newest gadget is a GPO Brooklyn, which looks like the famous 1980s New York ghettoblaster. It plays CDs and cassettes, but it also has USB ports and Bluetooth.

I love students that do 30-second skits and put them on Instagram, and @your_nay is my favourite. She’s a black girl from LA and she’s a really good comedic actress. She’s got one of them feisty little faces, she’s really cheeky.

I really like Downsizing, starring Matt Damon, which is unusual for me – I don’t watch much of his stuff. There’s so many levels to it and the idea of making people miniature is fascinating.

Joe Dante: You have to give a movie time to age, like wine
10