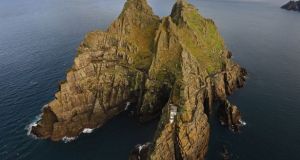 The popularity of the site has increased since it appeared in the Star Wars film series.

The number of visitors landing on the Unesco World Heritage site of Skellig Michael off the coast of Kerry is one and a half times what is considered environmentally sustainable.

The total number for the 2018 season running between mid-May to the end of September came to 16,792, the Office Of Public Works revealed this weekend.

This is just 37 more than in 2017 but is 5,692 visits in excess of the 11,100 cap the outgoing management plan approved by Unesco considers “sustainable” for the sixth century site.

An Taisce has expressed alarm at the numbers now visiting the “fragile” site.

Numbers had frequently exeeded the recommended figure, however, a huge spike has come in recent years and is attributed to island’s role as a setting in the latest Star Wars trilogy.

A world heritage site since 1996, along with the little Skellig, its sister island, the monastic island is also an important seabird breeding site.

Charles Stanley Smith spokesman for An Taisce and for the Environmental Pillar of conservation organisations noted how they had objected to the filming of Star Wars on the Skellig Michael in 2014 and again in 2015, saying the “fragility of the island cannot be over estimated”.

None of the dry stone structures built according to medieval principles were intended for the levels of activity now experienced, he said.

“The success of Star Wars is largely positive in terms of local tourism but in terms of visitor numbers is putting undue strain on Skellig Michael as a leading Irish Unesco site and on the island’s birds habitats,” Mr Stanley Smith said.

An Taisce and others would object to any further increase in landings and instead would look for improvements of Skellig Michael related tourism projects on the mainland, he said.

Submissions are being invited on a new 10 year management plan by the Department of Culture Heritage and the Gaeltacht. The tight deadline of January 18th was being extended following criticism and this was welcome, Mr Stanley Smith said. However, there should be consultation also when the draft plan was prepared and before it was submitted to An Taisce, he said.

Meanwhile, a public competition for boating permits to land passengers on Skellig Michael is also underway. Limited to 15 boats, the term of the permit is for three years. The closing time and date of this competition is 5pm on Monday 21st January, 2019.