Should LGBTQ identity be proud to be mainstream?

As Dublin Pride kicks off, an exhibition looks at those still hiding in plain sight 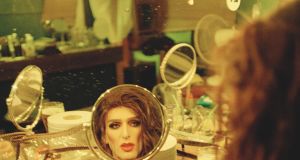 They’ve got gay marriage, can’t they just get on with it now? This, and similar sentiments start to swirl around the edges of a certain kind of conversation as Dublin Pride kicks off, bringing rainbows to the streets of the city, and trailing questions in its wake. Can you be subversive and counter culture if Tesco is a major sponsor? Should you have to be counter culture if you’re gay? How does that explain Leo Varadkar? And what does the mainstreaming of LGBTQ mean for a community who, for decades, have been defined, and defined themselves by their outsider status?

What happens to subcultures when they get subsumed by the norm?

I’m reminded of a, possibly apocryphal, story at the time of the marriage equality referendum, back in May 2015, when the Yes team were encouraging everyone to “have the chat” with those who might be against the proposition. “I’m voting yes, but it’s not going to be the thin end of the wedge,” an older person is said to have said. “They can have gay marriage, but they’re not getting gay divorce…” I laughed at the time, but now I realise that the Othering of gay people, though celebrated in an outburst of finery and swagger during Pride, masks a deeper schism, as well as a host of societal and mental health problems.

Adam Shanley, director of Gay Switchboard Ireland, describes a community who experience twice the rates of self harm, and three times the levels of attempted suicide (LGBTIreland study, comparing rates with the My World National Study of Youth Mental Health). That’s why Shanley, together with photographer Brian Teeling and art curator Sean Kissane, have got together to create Uncover, a series of portraits of people from all walks of Irish society, who also happen to be part of the LGBTQ community.

“It’s about hiding in plain sight,” says Teeling. “It’s about the legacy issues within the community. I myself have gone through sex addiction, hyper levels of depression, homophobia. It’s like a game of LGBTQ negative bingo. You get into a conversation and start ticking things off.” From decriminalisation, which was won in the European Court of Human Rights in 1988, by Senator David Norris, represented by then-barrister, Mary Robinson, but not enacted in Ireland until 1993; to the marriage equality referendum, there has been a huge shift in attitudes across Ireland. But what might have been lost amongst the wins?

In 2014, Derek Byrne wrote an opinion column in this newspaper suggesting that marriage was not a good fit for gay people’s lifestyles. “The campaign for same-sex marriage is a move too far, in my opinion, from the principles of equality,” wrote Byrne. “[It] is discriminatory in its very nature as it does not value the counter-culture responsibilities of the gay community.” He continued that “to be homosexual is to be part of a subculture within society. We are, quite simply, different from the norm”.

A similar argument was made in the United States at the time of the move to repeal the “don’t ask, don’t tell” accommodation that allowed gay people to serve in the US military, even though it was officially illegal. “So now openly gay soldiers get to fight and die in neocon-imperialist wars too?” asked Jonah Goldberg in an opinion piece for the LA Times in 2010.

Community is a loaded word, implying a group who think alike, and gel together, which is clearly not the case in any community

The issue with both marriage equality, and equality of opportunities to fight and die in questionable wars is clear – it’s one of equality of choice. The other question, buried within the issue, is more interesting: what happens to subcultures when they get subsumed by the norm? “I feel the community lost something in pursuit of heteronormative acceptance,” agrees Teeling. “I know the referendum was about more, but as part of the fight for that, we undersold, or hid away our collective queerness – and the thing is, we’re not normal.”

So, is it naive to ask whether “normal” might change? The society we live in was created by straight white men (at least they were “officially” straight). So why is it not more permeable to change when women come into the workforce? When LGBTQ people come out in numbers and stop hiding in plain sight?

“It’s really important to be able to balance both those concepts,” says Shanley. “Marriage equality was a very important marker in the sand. It was very important to be able to display that our love is just as legitimate, and that our relationships are just as valid. In essence it can be misconstrued as wanting to be in the mainstream, but it’s about having as equal access to the mainstream as anyone else. And it’s just as to maintain our own sense of identity. To maintain queer identity shouldn’t mean you can’t also access equality.”

Community is a loaded word, implying a group who think alike, and gel together, which is clearly not the case in any community, from local neighbourhood groups, to LGBTQ. The word “subculture” also implies, in its very structure, that the particular culture remains subordinate, while marginal groups are destined to be forever marginalised. “There are people who prefer the role of assimilation,” agrees Shanley. “They prefer not to identify with the queer community, and that can be difficult for those who sit on the Left.” This is, again, completely true across many cultural experiences. It should have come as no surprise when some Irish people, victims of colonial oppression and ghettoisation on emigration were, themselves, capable of racism. George Orwell had it nailed in Animal Farm.

In that vein, “normal” and “mainstream” can also be pretty miserable places for many who don’t fit an incredibly narrow pattern. That is why subculture and culture can coexist, and in healthy societies create space for both. In a truly healthy society, the former informs, shifts and helps to reshape the latter. A problem in today’s over-packaged, over-marketed society is that the subcultures, which provide valuable space for self-expression, and for dissent and counter-culture exploration, are sterilised so that people can go on “cultural safaris” into diluted versions of the real thing. It’s a bourgeoisification, sanitation of culture, presented as equality, that is instead a way of neutralising potential threat.

“What the f*** has happened to Pride?” asks Teeling, growing animated. “I’d like to start a Shame Festival, where we champion really really out there Queerness. “Penney’s are selling Pride merchandise. They’re giving a percentage to Stonewall [the Gay Equality charity], which isn’t even in Ireland. LinkedIn are sponsoring…” he pauses to consider the gulf between what Pride means to him, and its expression today, with its raft of corporate sponsorship and bright façade. “There’s a certain way of looking at queer culture: glittery, colourful, positive; but there’s another side to it, the social stigma, the depression, the legacy issues. We can’t ignore that, or it’ll come back to bite us,” he says.

The public figures in Teeling’s photographs are doing it, he says “for people who don’t have a voice”. The first photograph he took for the Uncover project was of Sinn Féin Senator Fintan Warfield. “We were in the Seanad, walking along. And outside the Fianna Fáil office there was this huge dead plant”. Warfield stepped behind it, and so the image was made. It’s hard not to want to see a metaphor in that.

Uncover runs at The Library Project, Temple Bar from June 25th to July 1st. The photographs are for sale in editions of 10, from €150.00, dublinpride.ie/events. The Uncover talk, featuring panellists including Brian Higgins from Pieta House, and Cian O’Brien from the Project Arts Centre, takes place at the LinkedIn HQ on June 27. Booking at uncovertalk.eventbrite.com

The Pride Parade kicks off from St Stephen’s Green at 2pm on June 30th, dublinpride.ie/parade

The exhibition PROOF: 30 Years of Gay Community News takes place at the Gallery of Photography from June 21 to July 1 galleryofphotography.ie / gcn.ie

Join The Outhouse Cookery Demonstration for mental health and wellbeing at Outhouse on Capel Street on Saturday June 23 at 1.30pm outhouse.ie

A Day in May, the play based on events leading up to the Marriage Equality Referendum, Olympia Theatre June 24th and 25th, olympia.ie

To work on TV, Normal People had to differ from the book
6 Miracle warnings and a lack of bull
7