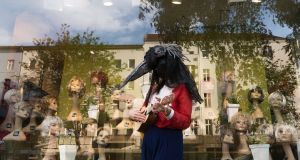 Karl Marx Strasse in Berlin’s Neukölln district is usually abuzz with Turks and tattooed hipsters, but not on this sultry Sunday afternoon.

The real action is hidden in the courtyard of an old apartment block, where a group of Irish artists living in Berlin are checking out the premises for Craw, a new arts and performance festival launching on June 22nd-24th.

Living up to its name, Craw is all about the participating artists – and their audiences – exploring what’s stuck in their craw about Ireland. Put another way if Ireland, as James Joyce said, is an old sow who eats her own farrow, “craw” is the farrow’s revenge.

The plan is to provoke and entertain and, as if anticipating the aggro to come, someone has sprayed near the entrance to Craw’s space: “Halt die Klappe!” Shut your mouth.

Go down a few steps to the cellar and we’re in a warren of dim performance spaces, still rank from a long Berlin party night hours earlier. All exposed brick and cracked white tiles, the Craw crew will transform the seven performance spaces into a horse-box bar; larger “cocoon” and “catacomb” spaces hosting performers such as Damien Dempsey; a Gaeilge corner; a confession box for one-on-one performances; a Siopa run by Temple Bar’s Sé Sí. In the courtyards will be food trucks and a fire where the festival will end by burning effigies and a coffin containing what is stuck in visitors’ craws.

All of the Craw organisers have come to Berlin in the last decade and have discovered new opportunities they didn’t find in Ireland.

Over two days, as part of the 48 Hours Neukölln Festival, “Craw” promises music, visual art and performance that stray into a dangerous minefield: between Ireland’s disenfranchised diaspora and the thin-skinned natives and the problems they prefer to ignore.

“People in Ireland say it’s terrible about the emigrants but then they turn on you and say ‘But you f***ing left!” says Shaun Mulrooney, a musician and performer.

For his sister Dee Mulrooney, an artist and teacher who lost her home in Ireland, Craw is about “clearing up our own backyard as emigrants – and the pain leaving causes many of us – before we criticise Ireland”.

Sitting in the venue courtyard co-organiser Candice Gordon, a singer-songwriter, hopes Craw can act as a feedback loop: tapping and catalysing a growing readiness to engage and adapt in Ireland, as clear from the recent referendum results.

Nina Hynes, a singer and performer in Berlin for the last decade, nods in agreement. “I have a feeling so many positive things are already happening,” she says. “We are just trying to provide an exterior space for a conversation that you often can’t have in Ireland.”

But they promise not to avoid confrontation, either, with Ireland’s perpetual problems: lack of affordable housing, childcare or decent public transport.

“When I visit Dublin now [it] feels like a pressure cooker about to explode,” says Richie Heffernan, a carpenter, conceptual artist and Craw co-organiser.

Engaging directly with Ireland’s shadows in Craw is playwright Mary Kelly, performing a play she co-wrote in 2004 touching on issues from travellers and violence against women.

“It just seems to keep coming back and again and again because, in Ireland, nothing is ever resolved,” she said. “I think people in Ireland are defensive about the problems because they don’t see a way out.”

A chance to engage

So how likely is it that the Craw crew – who some will dismiss as a gang of artists with “notions”, living a cliched/privileged life in Berlin – can make a difference?

With little-to-no planning time, and even less budget, Craw has been a labour of love for all concerned. But they say the buzz has been positive – in Berlin, around Europe and in Ireland. Their hope is that approaching problematic issues in Ireland indirectly through the arts rather than head-on increases the chance to disarm, engage and change.

At the very least, Craw will lead to new contacts, creativity and community among those who feel estranged from Ireland and its boom-bust capitalist model.

All going well, Craw will become an annual affair, offering a bridge between Ireland and Germany just as Dublin seeks new post-Brexit engagement with Berlin.

And while the Craw crew welcome any interest – and funding – from the Government, they are cautious about being co-opted by political interests.

“What Craw is not going to be,” says Richie Heffernan, “is a way to grease the wheels of commerce just so Ireland can sell more stuff here.”