‘Lord of the books’ creates a valuable library from rubbish

Impact Journalism Day: garbageman José Alberto Gutiérrez rescues great works of literature from the trash, and redistributes them to vulnerable communities in Colombia 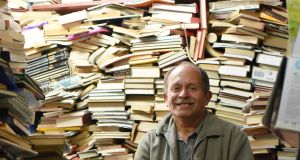 José Alberto Gutiérrez, known to locals as ‘Lord of the Books’: “The most valuable inheritance we can leave our children is education.” Photograph: César Melgarejo

Impact Journalism Day 2018 (June 16th, 2018) is dedicated to solutions-based journalism, sharing stories of positivity and innovation. As a member of the Sparknews alliance of 50 international media outlets, The Irish Times brings you stories of solutions to global and local issues. For more information see impactjournalismday.com.

“The day I fill Colombia with books, I’ll feel like Odysseus when he rescued Penelope and saved Ithaca from the war,” José Alberto Gutiérrez says with an air of stoicism. The 55-year-old has dedicated the past two decades to filling over 450 libraries, schools and reading centres in Colombia with books recovered from the garbage.

By rescuing books from the trash, the “lord of the books” (as locals call Gutiérrez in Bogotá’s popular neighbourhood La Nueva Gloria) has helped more than 22,000 Colombians in vulnerable, mainly rural areas across the country to imagine a better future.

To enter Gutiérrez’s house is to go through a labyrinth of thousands of stacked books, covering approximately 15sq m. Among them are universal classics such as Gone with the Wind by Margaret Mitchell, an English edition of The Little Prince by Antoine de Saint-Exupéry and a collection of Spanish author Miguel de Cervantes Saavedra’s works – all rescued from the garbage.

The books started showing up here at the end of 1997, when Gutiérrez began his job as a garbage truck driver for Bogotá’s waste management company. While working his nightly route on the west side of the city, he was struck by the potential of so many discarded books. With help from his wife, Gutiérrez decided to build a community library in his own home. Ten years later it became the Fundación La Fuerza de las Palabras (Strength of Words Foundation).

Since then, the lord of the books has rescued and distributed more than 50,000 books – spanning subjects such as science, literature, business and medicine – to hundreds of community centres and rural schools around the country.

La Fuerza de las Palabras’ process is simple, yet effective. First, the foundation receives a call from someone, in any area of the country, who wishes to donate or receive books. Then, Gutiérrez and his wife select the texts according to their destination – children’s books, literary or scientific. Depending on the distance, the organisation will either deliver the books in its own vehicle, or look for the best and quickest way to finance the delivery. To this date, their efforts have allowed them to reach over 450 territories in the country.

“The most valuable inheritance we can leave our children is education,” Gutiérrez says, adding that dozens have gone on to higher education thanks to the foundation.

According to figures from the Colombian Ministry of Education, each year only four out of every 10 students who complete their high school studies in Colombia will graduate from university. The number is even lower in areas affected by socioeconomic problems, such as the La Nueva Gloria neighbourhood.

If a book changed my life, imagine the impact it could have in one of these places that has fallen victim to armed conflict

At the end of 2017, the foundation sent five crates of books by plane to the indigenous community of Huitotacueimaní, in southern Colombia, an area characterised by its jungles and rivers. Days later, one of the leaders of the community replied with a video message saying that all the indigenous communities of the region were waiting for the lord of the books – and more books, too – with open arms.

The lord of the books has also delivered dozens of Nobel Prize-winning authors’ works, such as those by fellow Colombian Gabriel García Márquez, or Peruvian author Mario Vargas Llosa, to a group of ex-combatants of FARC, the guerrilla organisation that scourged the region for 50 years and recently signed a peace agreement with the Colombian government.

“Reading symbolises peace and hope in our country. If a book changed my life, imagine the impact it could have in one of these places that has fallen victim to armed conflict and abandonment by the state,” Gutiérrez says.

Since he was let go in February by the recycling centre where he worked, Gutiérrez and his family have been dreaming of building a library museum in Bogotá, which would include a recycling workshop, a book bank and a collection of literary classics, all with the aim of continuing to bring the marvellous world of reading to the most vulnerable sectors of the country. The foundation estimates that the construction of the library museum will require 800 million Colombian pesos (€238,000), which they hope to secure soon.

“The world needs more initiatives like this, because in an area that lacks access to many resources, a book becomes a symbol of hope,” Gutiérrez says. “Listen, if humans treated each other as they do in many of the books that I’ve read, this planet would be governed only by love.”