New this week: In the Fade, The Happy Prince, Ocean’s 8, Kissing Candice 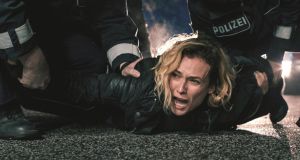 This time it’s personal: Diane Kruger in In the Fade

IN THE FADE/AUS DEM NICHTS ★★★
Directed by Fatih Akin. Starring Diane Kruger, Denis Moschitto, Johannes Krisch, Samia Chancrin, Numan Acar, Ulrich Tukur, Rafael Santana. 16 cert, limited release, 106 min
Kruger deserved her best actress award at Cannes for this harried turn as a German woman driven to violent revenge after neo-Nazis murder her child and her Kurdish husband. The picture begins as a model of controlled anguish as Kruger weaves the character’s despair into every muscle and every tortured sigh. Then, sadly, it falls into madness with a melodramatic trial sequence and a wildly implausible denouement. Indecently gripping nonetheless. DC

Effective, nicely acted study of Oscar Wilde’s decline featuring a bloated, puffed-out Everett in the lead role. There is no great revisionism at work. Bosie (Morgan) remains a selfish oik. Robbie Ross (Thomas) is again celebrated as the most loyal of supporters. The film-making, packed with too many close-ups, allows only a few mad flourishes. The Happy Prince does, nonetheless, mark out new territory in its willingness to probe Wilde’s final weakness and fragility. You can smell the decay. Full review/trailer DC

Female take on the glamorous sequence featuring all those listed above. Ocean’s 8, like its predecessors, exists solely as a vessel for movie stars and celebrities. A heist at the Met Ball ensures that, in addition to the main cast, there are glimpses of Anna Wintour, Serena Williams and Kim Kardashian. The film rattles along, powered by costume changes, silliness and Bullock and Blanchett’s attempts to out-cool one another. But few of these talented people seem to be trying very hard. Full review/trailer TB

Interesting, infuriating drama of teenage life on the Irish Border. The excellent Skelly plays a young woman who, during a seizure, falls for an imagined character who eventually turns up in the flesh. Kissing Candice is sure to drive some viewers barmy. As the picture goes on, its refusal to settle into a rhythm becomes irritating. Still, individual shots stick firmly in the brain. Characters linger. The impressive sound design makes its own throbbing case. We need odd things. Full review DC

How freaky is Hereditary, the “scariest film since The Exorcist”? Imagine if Rosemary’s baby had a child with little Gage from Pet Sematary and it climbed to the top of Jacob’s Ladder and fell down with a grotesque splat. Prepare yourself for a discombobulating study of grief that goes beyond the conventional seven stages to take in another 100,000 or so, ranging between psychiatric meltdown, demonic possession, sporadic pyromania and roaring-crying. A nerve-shredding masterpiece. Full review/trailer TB

On the night that fashion designer Alexander McQueen took his own life in 2010, his long-time collaborator and friend Mira Chai Hyde felt a presence in her room. It sounds unlikely, and yet, watching this well-crafted biographical documentary, one can empathise. The film-makers have properly scoured the archives in search of their subject and yet McQueen remains a ghostly, unknowable presence throughout. There are illuminating contributions from Hyde, from assistant designer Sebastian Pons, and from art dealer Detmar Blow, the widower of McQueen’s former mentor, Isabella Blow, as this elegantly constructed film outlines the biographical details. Full review/trailer TB

The Irishwoman who wed a Bee Gee: ‘It was like being married to the family’

10 The 20th century belongs to America