Sean Connery often said it was okay to hit a woman. The obits barely mentioned it 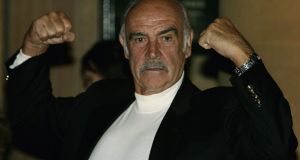 The late James Bond actor Sean Connery has been the subject of debate for comments he made in 1965 about “acceptable” ways to beat a woman. Photograph: Jeff J Mitchell/Getty Images

What do we do about famous people who thump women (or merely argue that thumping women is okay)? This is, alas, always a current question. We are never too far from a story about some celebrity with a history of domestic violence.

This week’s debate is generated by the differently-angled stories of Johnny Depp and Sean Connery. One unsuccessfully sued the Sun for identifying him as a “wife beater”. The other made a habit – before eventually issuing a quasi-retraction – of explaining the “acceptable” way of beating a woman.

Both cases confirm that, when it comes to domestic violence, excuses are still made that you wouldn’t expect to hear in discussions of mugging, child abuse or contract killings. “Every now and then, an innocent bystander deserves to be kicked in the head and relieved of his wallet,” no movie star ever said. “You don’t know the whole story,” few Twitter fanatics argue when a movie star’s child gets taken into care.

There is still a lingering sense that violence against women – particularly within the confines of a long-term relationship – is a nuanced form of outrage that requires delicate parsing.

Most obituaries of Connery danced discreetly around his record of defending the walloping of women. He always argued his comments in a 1965 interview with Playboy were quoted inaccurately, but a conversation with Barbara Walters more than 20 years later appeared to double down on the initial offence.

“I don’t think there is anything particularly wrong in hitting a woman, though I don’t recommend you do it in the same way you hit a man,” the Playboy interview relayed. In 1986 Walters, rolling her eyes in dismay, reminded him of his argument: “You don’t do it with a clenched fist. You do it with an open hand. Remember that?”

Connery didn’t flinch. “I haven’t changed my opinion. Not at all . . . I don’t think it’s that bad. It depends entirely on the circumstances and if it merits it.” He went on to parrot the familiar abuser’s baloney about how “women can’t leave it alone”. The video is still there on the internet. None of his defenders can suggest the quote is inaccurate or was taken out of context.

The notion that “it was a different time” does nothing to excuse Connery’s opinions. But, yes, it certainly “was a different time”. It is inconceivable that a 56-year-old movie star – someone of Brad Pitt’s or, ahem, Johnny Depp’s age – could now argue that striking women is acceptable and not face repercussions. There was barely a ripple in 1986.

The changes in attitude eventually caught up with even Connery. In 2006 the Scottish National Party supporter cancelled an appearance at the Scottish parliament because of bubbling controversy over those remarks. “I don’t believe that any level of abuse of women is ever justified under any circumstances,” Connery “told friends” at the time. It took only 40 years to clear that one up.

The dynamics of the Depp case are very different. In 1965 this sort of violent swagger was very much part of the James Bond persona. In Casino Royale, the first 007 novel, Ian Fleming has his protagonist explain that “the conquest of [Vesper Lynd’s] body, because of the central privacy in her, would have the sweet tang of rape”. Many Bond fans would have nodded approvingly at the disputed Playboy interview.

Having emerged first as a delicate, scalpel-cheeked autodidact – a man who’ll read you Ginsberg before ordering the absinthe – Depp would never have cultivated the mid-century thuggery that Fleming favoured. His action against the Sun for repeating accusations he was physically abusive to his ex-wife, Amber Heard, was largely concerned with protecting a different image. He lost that case and is now considering an appeal.

One could naively argue that the verdict confirms the pendulum has finally shifted. Heard (who, let us recall, did not instigate the case) seems vindicated and Depp is a subject of ridicule in mainstream media. But the hearings have been a nightmare for Heard. The kickback on social media from Depp “stans” has been violently abusive. Heard required a police escort to the Royal Courts of Justice while Depp basked in the adulation of a frenzied fan following.

Lady Helena Kennedy, a prominent British barrister, met Heard during the case. “There are still these pervasive myths about the kind of woman who deserves the protection of the law,” she told the Guardian. “Battered women have to [seem] meek and subservient to have our sympathy.” Victims of domestic violence still have to work harder for sympathy than those abused outside the home.

It is hard to tell if the verdict will destroy what is left of Depp’s career. In truth, he has been floundering in turkeys for more than a decade. He is due to appear as Gellert Grindelwald in the third Fantastic Beasts film, but, after a strong start, that franchise is already looking like a burpy reflux of the Harry Potter series. If Depp fades into the shadows, few outside his Twitter torch-bearers will even notice.