He was always a little out of his time, combining charm, menace and old-fashioned masculinity

Scottish actor Sean Connery, who shot to international stardom as the suave British agent James Bond and went on to dominate the silver screen for four decades, has died aged 90, the BBC reported on Saturday. Video: Reuters/ As Credited 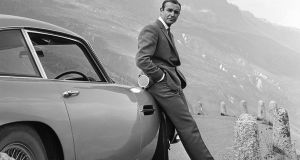 Sean Connery as James Bond next to his Aston Martin DB5 in a scene from Goldfinger in 1964. Photograph: Michael Ochs Archives/Getty Images

It is just two months since Sean Connery, who has died, celebrated his 90th birthday. The appreciations will have given him some sense of how subsequent obituaries would read. His origins in working-class Edinburgh. His position as an icon of old-fashioned masculinity. Sex appeal that endured into old age. And, of course, James Bond.

He was few observers’ first choice as the imperial thug — Ian Fleming, the spy’s creator, wanted David Niven — but to say he “made the role his own” is to understate the case.

From his first, dinner-jacketed appearance in Dr No, he became the Bond against which all others would be unflatteringly measured. The rumbling undertones gave 007 a hint of danger that Niven, for all his gifts, could never have managed. It was 1962 and the decade already had one of its signature icons.

James Bond hung over Connery’s career, but the character did not define or inhibit him. He went on to first-class performances in films such as Robin and Marian, The Man Who Would be King and The Hunt for Red October.

During the Bond years, he was suitably equivocal for Alfred Hitchcock in the sometimes underappreciated Marnie. In 1988 he won a best supporting actor Oscar for his role as a veteran Irish cop in Brian De Palma’s The Untouchables. There was nobody more adept at the charismatic throaty rumble.

Now it is time for the real obituaries.

Raised in Fountainbridge, to the west of Edinburgh city centre, Sean Connery was the son of a cleaning woman and a factory worker. (His paternal grandparents were Irish.) After working for a spell as a milkman, he joined the Royal Navy and served for a spell on HMS Formidable.

After a discharge on medical grounds, he delivered some more milk, worked as a lifeguard and displayed his muscles for life-drawing students at Edinburgh College of Art. He played a bit of football and was good enough to catch the eye of Matt Busby, Manchester United’s famous manager. “I realised that a top-class footballer could be over the hill by the age of 30, and I was already 23,” he said later. “I decided to become an actor and it turned out to be one of my more intelligent moves.”

Good looking after a rough-edged fashion, Connery worked steadily, if unspectacularly, throughout the 1950s. He secured a lead role opposite Lana Turner in the British melodrama Another Time, Another Place.

Irish fans have spent over sixty years forgiving him (if they were able) for his performance in the ludicrous Paddywhackery entertainment Darby O’Gill and the Little People.

Many legends squabble over authoritative explanation for his securing the role in Dr No. It certainly helped that he was cheap. The budget for the first James Bond film, released in 1962, was just $1 million. An approach was made to Patrick McGoohan, star of the pseudo-Bond TV series Danger Man, but that eccentric actor disapproved of 007’s libidinous excesses.

It seems as if Dana Broccoli, wife of producer Cubby Broccoli, saw something in the Scot that her husband missed. Whether by design or accident, they caught the spirit of an emerging, more egalitarian age.

Fleming’s original posher Bond would, in the 1960s, have had none of the appeal that the Fountainbridge milkman delivered. The author, who initially referred to Connery as a “f**ing truck driver,” eventually came round to that view. Just as John Le Carré came to see George Smiley as Alec Guinness, Fleming wrote later books with Connery in his brain.

When, in 1964, he wrote a premature obituary for Bond in You Only Live Twice, Fleming told us the character’s father was Scottish. To that point readers had seen Bond as the archetypal English patriot. Connery appeared in seven Bond films, ending his tenure with the “unofficial” Never Say Never Again in 1983.

Some actors like to be thought of as chameleons. Like John Wayne, Cary Grant and Jimmy Stewart, Sean Connery seemed happy to grasp hold of a persona and stick to it.

He was always a little recalcitrant. There was always a sense of menace lurking just beneath the charm. He was almost always a little out of his time (remember, as far back as Goldfinger, his Bond noted that drinking insufficiently chilled Champagne was “as bad as listening to the Beatles without earmuffs”).

Connery did little to dispel the notion that we were seeing something of the man himself onscreen. He could be terse with interviewers and, in 1965, speaking to Playboy, dug himself a hole from which he never satisfactorily escaped. “I don’t think there is anything particularly wrong about hitting a woman,” he said.

Connery failed to satisfactorily withdraw the comments when speaking to Barbara Walters some 20 years later, but he did eventually issue an apparent clarification in 2006. “I don’t believe that any level of abuse of women is ever justified under any circumstances,” he said.

Connery was a supporter of Scottish independence some time before that attitude became fashionable and was a generous supporter of the SNP until, in 2001, legislation made it illegal for those living abroad to fund UK political parties.

It is rumoured his politics caused Donald Dewar, Scottish Secretary in the Blair government, to block a proposed knighthood in 1997, but Connery eventually secured the gong in 2000. Much ridicule came his way for supporting the Scottish cause while residing comfortably in Marbella, but he remained a popular figure in his native country. He died peacefully at his home in the Bahamas.

Connery’s place in cinema history is a peculiar one. His trick was meshing the egalitarian modernity of the 1960s with a timeless old-fashioned recalcitrance. Many of those who unambiguously embraced the era appeared hopelessly old-fashioned by the time of the Opec oil crisis. Never entirely at home with the swinging values, Connery was able to shrug them off and move on to disdain for a whole new set of hip orthodoxies.

He is survived by his second wife Micheline Roquebrune, by his son, the actor Jason Connery, and by a legend that will surely prove indestructible.