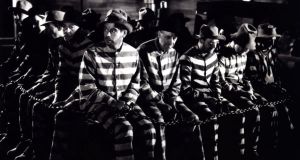 Paul Muni in I Am a Fugitive from a Chain Gang (1932), directed by Mervyn LeRoy. Photograph: Warner Bros.

There has been some debate in the Irish Times letters pages about the miserableness of films reviewed last week. It is true that the movies covered miscarriages of justice, eating disorders, deranged cults and terminal illness (though it’s worth noting that the last film referenced was a family flick for Disney+). In recent weeks we have also seen frisky entertainments such as Enola Holmes, The 40-Year-Old Version and Bill & Ted Face the Music. This weekend you can enjoy Bill Murray quipping about New York in On the Rocks.

Still, there are plenty of sombre films about the place. Should we be surprised? At such a grim time?

It has long been argued that the Great Depression spurred Hollywood towards brash escapism. No films make that case more convincingly than the musicals of Busby Berkeley. Deploying showgirls in their dozens to create near-surreal fantasias of music and dance, Berkeley offered the downtrodden a window on to glamorous transcendence. Did anybody really forget significant troubles when gawping at Footlight Parade or 42nd Street? Maybe so. Maybe not. But they couldn’t complain that Hollywood wasn’t making an effort on their part.

The Depression in the US also saw the arrival of Shirley Temple, The Adventures of Robin Hood and Snow White and the Seven Dwarfs. Misery and despair in the streets. Endless fun and frolics in the cinema. Right?

You probably suspect the approach of a hairpin bend. Warner Brothers’ two biggest hits in 1933 were, yes, Busby Berkeley films: Gold Diggers of 1933 and 42nd Street. But the studio’s third most successful film was a cheery little number called I Am a Fugitive from a Chain Gang. Mervyn LeRoy’s still-searing picture stars Paul Muni as an ordinary Joe forced into crime.

After escaping from prison for a final time, he encounters the female lead in a shadowy street. “How do you live?” she asks. “I steal,” he replies and backs into the penumbra. That’s the end of the film. No showgirls soften the blow.

I Am a Fugitive from a Chain Gang was not only a critical success, it made a great deal of money. Also clawing in the dough during the early, darkest years of the Depression were Universal’s legendary series of horror films: Dracula, Frankenstein, The Old Dark House. We may find them charming now, but Frankenstein was banned in Ireland for being “demoralising and unsuitable for . . . nervous people”. (It didn’t take much to get banned in Ireland, but still.)

By 1934 there was so much moral outrage about sex and violence in Hollywood that the industry allowed the introduction of the Motion Picture Production Code to contain their own decadent excesses – and to ward off formal censorship. The period before this came retrospectively to be known as the pre-code era: the time of LeRoy’s Little Caesar, Howard Hawks’s Scarface and (more shocking now than then) Tod Browning’s Freaks.

It was, in short, another 40 years or so before American cinema was so taken up with cruelty. In the worst of times, punters required the greatest variety of entertainment. Curly Top on Tuesday. Island of Lost Souls on Wednesday.

Yet a myth has continued that grim circumstances generate merry, escapist art. After the September 11th, 2001 attacks in the US, a number of columnists argued that entertainment – and cinema in particular – would henceforth be less violent and more life-affirming. The Depression was used as an example.

Yet one need only look back to the early 1970s for evidence that audiences do not necessarily crave lightweight fun when the chips are down. The highest grossing film of 1973 in the US was The Exorcist. The unremittingly miserable (and now near-unwatchable) Last Tango in Paris was at number seven. While inflation raged, the Vietnam War petered out and Watergate simmered, Americans flocked towards demonic possessions and middle-aged depressives sexually abusing vulnerable teenagers.

The point here is that we can’t really draw any pat conclusions about the tone of art that will dominate in troubling times. The current discussion is constrained by our awareness that Hollywood studios have pulled much of the big-budget fluff that would perk up darkening evenings. You won’t see the latest James Bond or the next Top Gun flick for a few months.

No films commissioned during Covid have yet reached our screens. But the popular success of Normal People on TV – not the jolliest of romances – confirms that audiences want more than comfort food in times of stress. They want comfort too, of course. Just look at the discourse around the blissfully frivolous Emily in Paris.

There is a lovely scene in Woody Allen’s Crimes and Misdemeanours that finds the director’s character careering from euphoria to despair after a medical scare. Religion doesn’t help, but the Marx Brothers do. Allen’s half of Crimes and Misdemeanours ends with a celebration of creative absurdity. The other half is about a man facing up to existential emptiness.

We need both and we will continue to get both.