Spanish Train, released 45 years ago, still stands the test of time – except for one song 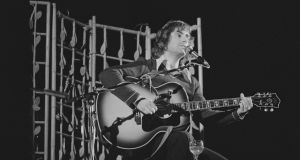 On a cold April night in 1975, Chris de Burgh walked on stage at McGill University in Montreal to a chorus of jeers. This wasn’t a surprise. The crowd had already booed him through his 20-minute performance, a curtain raiser for Ayrshire duo Gallagher and Lyle and that evening’s headliners, Supertramp.

“I thought, f*** – I’m going to take an encore. That got another resounding row of boos,” he remembers. “The French-Canadians didn’t want to see a guy with a guitar. But I was so incensed, having flown across the Atlantic. It was really tough. One guy with a guitar. I didn’t have any management. I just had to fight my corner.”

De Burgh, then 26, had just one record to his name in Far beyond these Castle Walls, named after this childhood home of Bargy Castle near Rosslare, Co Wexford. It hadn’t caused much of a stir and it was by no means certain A&M Records would renew the two-album contract he had signed the previous year. Every concert was a fight for survival.

Still, he had begun to notice that several of the new songs he was performing supporting Supertramp around Europe and North America were going down well. Even in Montreal (which ironically later became one of his biggest markets). There was an especially effusive response to Spanish Train, a baroque piece that imagined God and the devil playing poker for possession of a man’s soul.

It would go on to become the title track of his second record, Spanish Train and Other Stories, which marks its 45th anniversary on November 1st. The album was de Burgh’s biggest hit to that point in his career (aside from 1974 single Turning Round, a surprise chart-topper in Brazil). And it endures to this day as a masterclass of soft-rock.

De Burgh is a complicated figure. Any conversation about him must negotiate the fact that through the 1980s, and after Lady in Red in particular, he became pop’s very own sultan of syrup. Well, fine: some of his songs stand up better than others.

But, in Ireland especially, he’s never given enough credit. His best material is worth rediscovering and celebrating. If we’re rehabilitating Phil Collins, Billy Joel and Toto, why not the artist who wrote Don’t Pay the Ferryman and High on Emotion?

Spanish Train, it can be argued, falls short of true perfection. Patricia the Stripper, most obviously, might raise eyebrows today (it’s still a fan favourite, reveals de Burgh). Yet considered in its entirety the LP is often sublime. The ballads are particularly strong, with Lonely Sky and Just Another Poor Boy among his finest.

The record also yielded a modern Christmas staple in A Spaceman Came Travelling. This was essentially Bowie’s Starman trapped inside a tinsel snow globe (de Burgh says he wasn’t really listening to Bowie at that time).

But it was Spanish Train itself that he was pinning his hopes on as he tramped around American with Supertramp, who were promoting their Crime of the Century album.

“I had a strong feeling about the title track. It always got a terrific response. At that time I was full of energy and belief.”

The song had come to de Burgh during the recording of Far beyond these Castle Walls. Halfway through the album, producer Robin Geoffrey Cable (engineer on Harry Nilsson’s Without You) had announced he and his Portuguese girlfriend were going back to her hometown for a holiday. De Burgh was slightly nonplussed but took up their offer to travel with them.

“It was right on the border between Portugal and Spain,” he says.”Once we got there Robin said, ‘There’s actually not enough room for you to be in the house’. They put me in a bed in what appeared to be a warehouse. It was pretty grim, to be honest. I thought, I’m not going to stay here very long. I set off for Spain.”

The next day, after almost no sleep, he found himself on a wheezing two-car carriage heading to Seville. “This was still the time of Franco and the Guardia Civil, who wore their distinctive hats. I remember sitting on this hot train, going very slowly. There was an elderly lady with two plastic bags full of produce.

“Every time the Guardia Civil came into the carriage she was in, she’d get up and very, very grumpily go into the other carriage. The whole thing was becoming surreal. It was later afternoon and very hot. We’d just crossed the Guadalquivir river.”

“I glanced to my right. A farmer had put these very dry, desiccated pieces of wood to create a rudimentary fence on his land. As I glanced out the window, they looked like skeletons dancing. And I thought, Well, maybe the driver of the train is a skeleton. I took out my notepad and wrote down the first line … “There’s a Spanish train that runs between Guadalquivir and old Seville”.

Back in London – he had moved there after graduating in French, English and history from Trinity College Dublin – he laboured tirelessly on the song. De Burgh then presented it and several others to Guy Fletcher and Douglas Flett, the production duo who had signed him to A&M (and took a percentage of his royalties until he later fought his way free of the contract). Also on the tape was A Spaceman Came Travelling and Lonely Sky.

“The next day they called me and said, ‘We don’t like the songs very much’. I was crushed by this. I knew Spanish Train was good.”

He persevered and recorded Spanish Train with producer Cable at Scorpio Sounds. Shortly after submitting Spanish Train to A&M, de Burgh was summoned for a meeting by the label’s head of A&R, Mike Noble. Arriving at A&M’s offices on the King’s Road, he was ushered into a room, where Noble was joined by the head of the label Derek Green.

“Lonely Sky came on and I thought … ‘This is a s**t song’. I’d been told it’s not very good. And at the end they both stood up and clapped.”

Spanish Train wasn’t a global smash. But it positioned de Burgh as an artist to watch and sold respectably in English-speaking territories (Germany, where he would have his greatest success, would come around later). And, as points out, it stands up today.

The exception is Patricia the Stripper, which feels like Noël Coward trapped in a Carry On picture.

Patricia was inspired by a party in Norfolk to which de Burgh was invited by a hoity-toity woman who worked in publishing. There was fly fishing (he fell in head first and was covered in mud) and dressing for dinner. The toffs you hear at the beginning are a caricature of de Burgh’s companions that weekend.

“It’s a huge favourite,” he says. “To this day people love it. They were more open-minded back then. We had real strippers baring their boobs.”