The Mole Agent: Who needs James Bond when you have this? 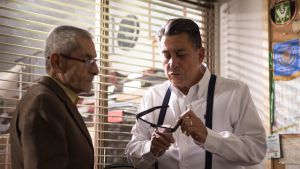 We didn’t get a James Bond film in 2020, but who needs one when we have Maite Alberdi’s charming hybrid drama-documentary The Mole Agent?

Rómulo (Rómulo Aitken), an ex-Interpol op now a private detective in Chile, places a newspaper ad seeking men aged 80-90. A lovely montage shows the jobseekers. The successful applicant, Sergio (Sergio Chamy), is a grieving 83-year-old widower hoping to feel useful again. His mission is to infiltrate a nursing home and investigate whether a female resident is being robbed.

Like 007, Sergio is trained to use special spy equipment, including a camera-pen. And like 007, he’s a real hit with the ladies at the nursing home, where women outnumber the men 10-1. Even avowed singleton Bertita starts to fantasise about marrying this most dapper gentleman.

Sergio Holmes, as he’s not called, wanders the rooms and hallways, taking copious notes and looking to make contact with his “target”, who turns out to be an antisocial patient named Sonia.

When he isn’t snooping, Sergio is a thoughtful companion and listener, admiring one lady’s poetry and helping another through her Alzhiemer’s symptoms. There is, he discovers, a thief in the home, but it’s not who Rómulo’s client was expecting. More poignantly, Sergio soon realises that Sonia’s suspicious daughter never comes to visit.

Pablo Valdes’ omnipresent camera makes the viewer wonder exactly how much everybody onscreen knows. (Officially, Alberdi received permission to film inside the nursing home by telling its staff that she was making a documentary about old age.) But the film never hides its artifice or playful devices.

Besides, there’s no faking Sergio’s emotional impact at the home and the lovely, heart-tugging friendships we witness along the way.

How often can you say that about a James Bond film?