Did you know Last Christmas used to be called Stephen’s Day Is a Bit Sh*t? 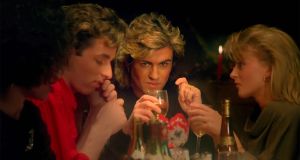 Wham’s Last Christmas video: my template for what successful adulthood looked like when I was a child

This week I have undertaken a critical analysis of some of my favourite Christmas songs.

Last Christmas by Wham
Wham’s Last Christmas video was my template for what successful adulthood looked like when I was a small child. Yes, as I may have mentioned before, my imagined adulthood would involve me, George Michael, Andrew Ridgeley, our friends Pepsi and Shirley and “unidentified George Michael love interest” gathering at a ski lodge where we would glower at each other over a sumptuous feast as we contemplated romantic betrayal. I couldn’t imagine a better way to spend an evening when I was a pompous eight-year-old.

“Last Christmas I gave you my heart but the very next day you gave it away,” sang George in the song that was titled Stephen’s Day Is a Bit Shit until Ridgeley suggested that, instead of “pioneering the St Stephen’s Day song” (as George Michael had passionately argued), they should instead add jingle bells and focus on the more lucrative Christmas part. Ridgeley couldn’t play an instrument, but he knew how to wear tight white shorts and, clearly, how to make Christmas gold.

Happy Xmas (War Is Over) by John Lennon
One of a series of holiday songs Lennon wrote featuring unlikely political sentiments, Happy Xmas (War Is Over) joins Merry Easter (Abolish Parking Fines in Regional Urban Centres) and Have a Great Halloween (Brexit Means Brexit) in the Lennon canon. The slightly inaccurate refrain goes “War is over, if you want it”, which might have been more plausible if it wasn’t coming from a multimillionaire who apparently cofounded a record label as a tax dodge and whose politics can best be described as “very vague”. In fairness, though light on policy detail, this is a great song. Nowadays, however, most mainstream broadcasters must add an extra verse in which a red-faced man screams about how war is actually good for the economy, for balance, like.

Mariah, imperiously grooving before her ice palace (see video), has of course just rolled with it, sublimating her lust for conquest into melody and royalty cheques. All I Want for Christmas Is You is also famous as the final Christmas hit. It was released in 1993, and there have been no lasting Christmas hits since then (unless you include Stay Another Day, by East 17, which only counts because it features jingle bells and the video sees the band all dressed in snow onesies, like toddlers). Aurally speaking, we’re locked in a perpetual Christmas past, our jinglicious glory days behind us.

Mistletoe and Wine by Cliff Richard
“A child is a king, the carollers sing,” Cliff warbles, coming dangerously close to referencing the “J” word in his wholesome evocation of Christmas cheer. In general, we don’t like things to be too Jesusy in our melodic celebrations of Christmastime. Even Chris de Burgh basically implied that He was just ET from the film ET or possibly Baby Yoda. And if Jesus turned up in Driving Home for Christmas Chris Rea would just scream at Him while overtaking Him on the inside lane. Indeed, if you were to go by the title of Cliff’s Christmastime stomper Mistletoe and Wine you might think he was going to sing about boozy snogging, but he in fact sings about kindness and goodwill to all men as he riles up a snowy choir and a child chorister. Look at him there in the video, going buck wild in the snow, swaying aggressively for Christ. The man’s a legend.

Santa Baby by Eartha Kitt
There is a subset of people who are sexually attracted to Christmas. This is the song for them, a song in which Eartha Kitt seductively enumerates all the many things she would like to receive from her “lover” Santa Claus. Of course, in those days it was perfectly reasonable for someone to be erotically enthralled by the hirsute hierophant’s yuletide largess and paternalistic “dad bod”. Nowadays, to retain the interests of Generation Z, Santa Claus is completely ripped and has a whole Instagram channel in which he posts videos of himself working out and drinking horrible smoothies.