Donald Clarke: Why do so many people insist on telling you they’re uninterested? 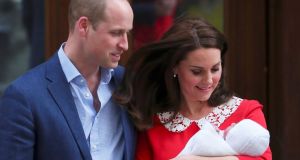 'Another porker': The Duke and Duchess of Cambridge with their new son. Photograph: Hannah Mckay/Reuters

Don’t get me wrong. I am not much interested in the new royal baby either. Even if the British monarchy did still lead armies against the French, hide from revolutionaries in apple trees or have historically significant fallings-out with the pope, the latest prince is so far from ascension that such responsibilities would surely elude him. But I’ve no problem with other people following the story.

Indeed, Kay Burley’s unlikely recovery from national joke to (albeit somewhat ironical) national baby-bothering treasure cheers the cynical heart. Until quite recently the Sky reporter was best known for an unfortunate report on 9/11 (“The entire eastern seaboard of the United States has been decimated”) and a misjudged tweet of a dog after the Bataclan theatre attacks (“#sadnessinhiseyes”).

As the duchess of Cambridge moved towards natal completion Burley yet again positioned herself outside the Lindo wing of St Mary’s Hospital in London to talk baby names with bookies, tolerate lunatics in union-flag headscarves and generally behave like a British good sport. Her early retweets confirmed that she was relaxed with wry caricatures of her as this century’s sycophant-in-chief. One half-suspects that, knowing what’s now expected, she delivered her supposed “gaffe” on purpose. “Another porker,” Burley said on hearing that the baby weighed in at 8lb 7oz. I predict that the Burley birth howler will become as much a part of royal tradition as the queen’s Christmas speech or the consort’s racist outburst.

What think ye the name shall be? The crier relays he be four barley clods and a half-faggot in weight. Verily, a porker

Anyway, that’s all good fun. Carry on. Or don’t. If you are unconcerned with the latest doings of the dynasty then look away.

What’s annoying me this week are those people who insist on telling you that they’re not interested in the royal baby. They are the same people who pretend to greater levels of ignorance about such subjects than anybody capable of walking upright could easily manage. “Which one is the queen? Is she the one who flies helicopters?” they don’t really say.

For about 98 per cent of British history these people got to broadcast their lack of interest only in buses, public houses and doctors’ waiting rooms. I have just encountered an ancient manuscript describing scenes around Ye Slaughtered Frog, a tavern in 14th-century Cheapside. Mistress Burley, who hollers gossip from the fish market to the tannery, has arrived to announce that a son has been born to Queen Catherine. “Have ye come far?” she says to some passing visitors. “What think ye the name shall be? The crier relays he be four barley clods and a half-faggot in weight. Verily, a porker.”

Long before Mistress Burley comes within earshot Yeoman Boreface (whose opinion has not been solicited) barks out his unwillingness to entertain any discussion of the topic. “Why be this news? I care not for the whelps of perfumed queens. What about those who sleep unhoused? Care we not for the plague-ridden? Ha. Laughing out loud! We prattle about this prince, but . . .” Try as his companions might, Yeoman Boreface will not shut up about how uninterested he is in the future Henry VI. You could fill whole Domesday Books with his unstoppable explanation of how little he cares for a subject about which he’s not being asked.

Earlier this week every second person on social media was there with a 21st-century version of Yeoman Boreface’s complaint. Private Eye has a lot to answer for. Five years ago, when the media really was engorged with news about the birth of Prince George, that satirical magazine fairly and amusingly put only the words “Woman has baby” on its cover. As too often happens, a good joke was regurgitated so often that it became more irritating than the source of the satire. You know. Like headlines archly referring to George Clooney solely as “husband of the renowned barrister Amal Clooney” above stories from the red carpet. It’s now worth doing only if you’re not actually joking. “Woman has baby” is still clogging up Twitter.

A great deal more of this is coming down the tube. If you thought people were too willing to explain how little they cared about the royal baby just wait until they mouth off on next month’s British royal wedding. Oh, don’t pretend you don’t know who I’m talking about. “American TV actress marries former soldier.” Ha ha! When Prince Harry’s brother got married, in 2011, the Guardian put a button on its website that allowed the sandalled user to remove all royal news. How they laughed in the senior common rooms of red-brick universities. That militant apathy is ready to sweep its sway across every continent again.

Not that it worries me. I long ago learned to not care about those who love to tell us they don’t care. I don’t go on about it. Well, not much.