What do you mean you won’t be watching the snooker?

Donald Clarke: The greatest sporting event of the calendar is about to begin 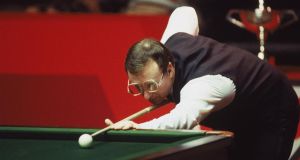 “Oh, he doesn’t want to be straight on the blue!” Consider me out of the office. The greatest sporting event of the calendar is about to begin.

Snooker is worth watching because it features genuine characters and, involving lengthy rubbers that allow much focus on facial expressions and physical tics, offers much opportunity to absorb those personalities. It’s true that we no longer draw from the Dickensian grotesquery that gave us the enormous Bill Werbeniuk (a cheerier Mr Bumble), the vampiric Ray Reardon (a kindlier Mr Dombey) or the cheeky Jimmy White (more artful than any dodger). But the charabanc arriving at the Crucible Theatre in Sheffield still transports a variety of heroes and villains.

The player known until recently as “Young” Judd Trump teeters permanently on the edge of his own irresponsibility. Ding Junhui struggles to shake off the illusion of monumental sadness. Still head of the bill – although only second seed – is the puzzling mass of psychological contradictions that goes by the name of Ronnie O’Sullivan. When everything’s going nicely O’Sullivan radiates more sweetness than you’d expect from an anime unicorn. On an off day he looks capable of shoving the table in the back of his van and taking it home so that nobody else can have a go. After losing badly to Mark Allen at this year’s Masters the Rocket suggested he wouldn’t bother with the World Snooker Championship. But he’s here.

These personalities are introduced with a class of pizzazz that permits kitsch but stops just short of full-on vulgarity. They all have nicknames. They all have “walk-on music”. For some years snooker fans have puzzled over the characterisation of Mark Selby, current world number one, as the “Jester from Leicester”. Although he’s rarely surly, nothing in his demeanour suggests any inclination towards the belled motley. The name seems to have been selected for no other reason than it makes more sense than “Esther from Leicester”.

We like Ryan Day because he walks on to The Passenger by Iggy Pop. The supernaturally drab Peter Ebdon used to puzzle everyone by entering to AC/DC’s Back in Black. Some very unkind people on Twitter have suggested that the well-rounded, homely Mark Allen, raised in Antrim town, chose a little too well with Freed from Desire by Gala. But we don’t think that at all.

That moment of zip is followed by a meditative calm that few other sports can manage. Golfers compete against only themselves, but they are not, during a round, required to endure endless periods of seated inactivity. While much happens for one player and nothing for the other, the commentators calmly, soothingly intone the sacred mantras. “Is the plant on?” funny Ken Doherty wonders. “He can play this as a shot to nothing,” Dennis Taylor supposes. The amiable, popular Steve Davis – whose public image has transformed more dramatically than that of any sportsperson since the once feared, now adored George Foreman – will wonder whether “the black will go back on its spot”. If any viewer were to fall asleep (which they obviously won’t, because snooker is incredibly exciting) they would be intermittently awakened by John Virgo bellowing: “Where’s the cue ball going?”

All this is in the service of a game that, at its highest level, beautifully meshes the miraculous and the possible. The best players demonstrate a knowledge of geometry and an aptitude for applied kinetics that no creation of the Marvel universe could match. But the mortal can still dream. No ordinary person could ever drive a golf ball 350 yards. No average Joe could serve as fast as Venus Williams. But, like the hypothetical monkey typing Shakespeare, an everyday snooker fan might just, if he or she tries a thousand times, sink that long, long black and hold for the tricky red.

It’s a sport of feasible enchantment.