Donald Clarke: The curse of the ‘crying laughing’ emoji, aka Blubbing Dipstick 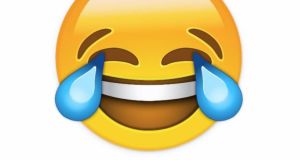 Apparently, Google is altering its software to allow users quicker access to emojis. Depress just two keys and you will bring up a pile of poo. Depress a few more and, for all I know, you will generate that oddly inescapable flamenco lady.

The issue is not really with the design itself. Had it been used only sparingly – like, say, the sombrero emoji or the one for Easter Island – then it might have retained some charm. I’ve made a modestly amusing joke on Facebook and my friend has charitably pretended that it caused him to wet himself. How nice. Carry on.

The Crying Man is still used that way. But it has also become depressingly popular with right-wing bullies, proponents of anti-scientific guff and, least importantly, but most annoyingly, rude people playing online video games. Half Man Half Biscuit, the immortal Merseyside band, ridiculed this group a decade ago on the song Bad Losers on Yahoo Chess. “Cetshwayo got a shock when he attacked Rorke’s Drift/ But he didn’t get stroppy and he didn’t get miffed,” Nigel Blackwell yells at the prematurely logged-out “Dennis Bell of Torquay”.

The Blubbing Dipstick is used more frequently by bad winners – habitually even less tolerable than Nigel’s bad losers. In the olden days, you could play a game of Ice Hockey Assassin against a 10-year-old in Vladivostok without having to endure any closer interaction. Now, when you let in an easy goal, there is every chance that the pseudonymous little chancer will send you the most dreaded of all emojis. What sort of fellow, after defeating an opponent, points at him and laughs until tears roll down his victorious cheeks? Not an honourable fellow. Not a sporting fellow.

Time moves quickly in the digital world. It comes as something of a shock to discover that, in its current form, the Bawling Jackass has been around for only eight years or so (it didn’t exist when Bad Losers on Yahoo Chess was released). It had ascii precursors. The still-pestilent “lol” is an ancestor, but that ghastly expression has become so meaninglessly ubiquitous that it scarcely registers. Too many, lol, idiots, now use it, lol, as nothing more than a beat, lol, in their meaningless sentences. Were Albert Camus alive today, L’Etranger might begin: “Mother died today. Or maybe yesterday. Lol.”

By contrast, the Sobbing Cretin has grown in malignity. The news, in 2015, that it had become Oxford Dictionaries’ Word of the Year should have heralded its drift into bland unavoidability. Instead, it becomes more enraging with every passing month. This is partly to do with its role as the gag that people with no imagination use when they can’t think of anything more original. The more common it becomes the more irritating this seems.

None of these things makes you seem wittier. They convince us you have little more imagination than the average sea anemone. You probably post “tell us what you really think” beneath strongly expressed opinion columns. In an earlier era, you’d say “nice weather for ducks” when arriving into the office on a rainy day. Think for your bloody self.

It is, however, the Wailing Mooncalf’s role as friend to the alt-right fanatic that guarantees its place in the contemporary linguistic bestiary. Right now, in a fetid corner of the internet, somebody with a frog for an avatar is taunting a blameless young person for daring to complain about racism, sexism or homophobia. A tendentious argument involving endless false comparisons – “Why no White History month?” – concludes with too much use of the word “cuck” and a sequence of yellow heads spouting moisture from either eye. It’s the bully’s taunt, the ignoramus’s “QED”, the conspiracy nut’s middle finger to all sane argument. The Keening Imbecile can go to hell.

Oh, tell us what you really think. Why don’t you?