Patrick Freyne: Twink connects with the birds, not just the incontinent cockatiel on her shoulder

Adele King, with an actual cockatiel on her shoulder and a terrier called Teddy Bear, lodges with Lucy Kennedy 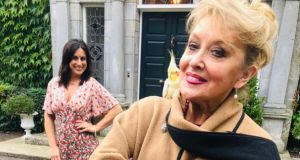 Lucy Kennedy and Adele King aka Twink, with her shoulder-cockatiel

It makes sense that an entertainment professional such as Lucy Kennedy or indeed the entire Virgin network would need to take in lodgers at this difficult time. It was also necessary to change the old title, Living with Lucy, because that was thought to be too optimistic a title, and Hopefully Not Dying with Lucy was considered a little on the nose. Lodging with Lucy, on the other hand, conjures up the spectre of a lost Patrick Hamilton novel all about a boarding house run by a nefarious busybody during the second World War. It’s perfect.

This is the best Lodging with Lucy (Monday, Virgin Media One) episode, because in it she is joined by Adele King aka Twink, formerly of the 1970s terror organisation/pop group Maxi, Dick and Twink and omnipresent on the cathode ray tube when I was a boy.

1 Woman stranded in Ireland due to pandemic has ‘miracle baby’
2 Matthew McConaughey: ‘I wouldn’t give back one ass-whupping for the values that are ingrained in me’
3 Covid-19: Critical cases from NI could put pressure on services in Republic
4 Behaviour is best Covid-19 vaccine available
5 Seán O’Brien: Anger over my parents’ break-up never left me
6 John McManus: Is this the best little country in the world for lockdowns?
7 Martin Feeley: Hospital admissions don’t justify pressing the panic button
8 Breathe easy to maximise your running experience
9 Don McLean: ‘My ex-wife is the worst person I ever knew’’
10 Una Mullally: Alan Kelly is shrewdly hitching Labour’s wagon to Sinn Féin
11 Covid-19: Public urged to ‘stay at home’ as 1,025 further cases confirmed in State
12 Wet pubs and schools reopening led to rise in Covid cases, says Mayo GP
13 Two hundred Irish retailers for all your online Christmas shopping
14 Hurrah for the companies giving staff more time off
15 When Anthony Clare met ‘calculating, disturbing’ Jimmy Savile
16 Róisín Ingle: We’ve started new Lockdown Eve traditions. Like Christmas Eve, only with more dread
17 Eight politicians swear statements to receive full expenses for lockdown period
18 US election: ‘Donald Trump needs to go. White America got what they want’
19 Suzanne Lynch’s US Election Diary: Trump campaigns relentlessly in bid to close polling gap
20 Transmission of Covid-19 on flight into Ireland linked to 59 infections
21 Plenty of positives for Farrell as Ireland hit the ground running
22 Australia demands answers after women taken from Qatar Airways flight and strip-searched
23 Couple found guilty of murdering Irish dancer with ‘devil’s breath’ drug
24 Stardust campaigner Eugene Kelly dies suddenly aged 62
25 Life under Level 5: Where can I go, who can I see, what is closed and what is open?
26 Will Connors chops his way to the front of Ireland’s openside queue
27 Troubles legacy: London’s break from deal ‘deeply concerning’
28 RTÉ to seek 70 voluntary redundancies as ‘large costs’ beckon in 2021
29 Gardaí say 52 people who went missing in 2020 not yet found
30 Strengthen your muscles without leaving the house
31 High-intensity workouts may be more enjoyable than less strenuous exercise
32 Lockdown mid-term: what to do, watch and cook this week
33 Madness or defiance? The GAA is taking a huge gamble in staging Championships
34 Covid deniers: for the sake of the vulnerable, do what’s asked of you
35 US election: Trump targets Pennsylvania as race enters final stretch
36 Saving Tim Robinson’s Roundstone home, his last gift to the Irish nation
37 Ireland braced for a daunting assignment in Paris
38 Education sector to offer thousands of free courses to workers affected by pandemic
39 HSE spent €700,000 a month since March on external Covid-19 consultants
40 Direct provision: Keep private sector asylum-seeker facilities – report
Real news has value SUBSCRIBE