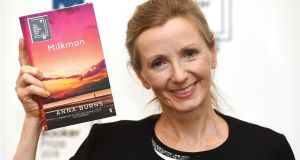 Anna Burns: “I could see and feel at once that Milkman was going to be much more about the Troubles than anything I’d written before.” Photograph: EPA/Facundo Arrizabalaga

The 26th Christopher Ewart-Biggs Literary Prize has been won by Anna Burns for her Booker-winning novel Milkman.

A second Ewart-Biggs prize for a work dealing with the implications for Brexit has been awarded to Belfast academic Katy Hayward for her Twitter account dedicated to the issue.

The literary prize, worth £7,500, was instituted in memory of the British ambassador to Ireland who was murdered by the IRA in 1976. Its objectives are to promote and encourage peace and reconciliation in Ireland, a greater understanding between the peoples of Britain and Ireland, or closer co-operation between the partners of the European Community, ideals which inspired Ewart-Biggs and to which his widow Jane dedicated herself.

“All these works contributed to understanding the contemporary and historical pressures which lie behind the tragedies (and victories) of living life in Northern Ireland; all are in their different ways distinguished, powerful and perceptive. It was not an easy decision. But in the end we chose a work which is formally daring, psychologically insightful, and unforgettably demonstrates the mechanisms of violence and the reactions which it evokes: a book which speaks to the reader like a voice in the ear, and holds the attention to the last page.”

Burns, who won the Booker Prize in 2018 and will find out next week whether she has won the €100,000 International Dublin Literary Award, said: “I can’t begin to tell you how honoured I feel. I can hardly believe this has happened. I thank the Christopher Ewart-Biggs Memorial Trust for setting up this prize, and for their generous-hearted aims in doing so.

“Although I never set out in my writing to cover particular topics and instead wait for whatever stories my characters will reveal to me of their personal lives and their environments, I could see and feel at once that Milkman was going to be much more about the Troubles than anything I’d written before. In particular I mean what it feels like to live day-to-day inside a ‘say nothing’ culture, and about what fear and terror does to everybody. My characters aren’t theories or ciphers or diktats. And neither are we.

“Finally, I wish to express my gratitude to the judges for choosing my book as this biennial year’s winner, and from such a distinguished shortlist too. I thank you from the bottom of my heart.”

The announcement of the winners had been delayed since the spring, in the hope of being able to hold a face-to-face presentation in Dublin.

Christopher Ewart-Biggs and Jane Ewart-Biggs were also convinced and passionate Europeans, Foster said, and given that one of the rubrics of the prize is to increase understanding between the peoples of Europe. the judges decided to award a second prize, to a work dealing with the implications of Brexit.

Foster praised the other shortlisted authors – Tony Connelly for Brexit and Ireland; Kevin O’Rourke for A Short History of Brexit; and Fintan O’Toole for Heroic Failure – before singling out Hayward for her commentary, in particular her high-profile Twitter account, which provides her own political and sociological account of the Brexit process, as well as curating links to work by other authorities.

“We are indebted to all these authors for expanding our horizons and clarifying a tangled tale, which has not yet reached its conclusion,” Foster said. “The candidate who did this most comprehensively, as well as increasing our understanding of the European context in which modern Ireland operates, was Katy Hayward.”

Haward said winning the prize was “ a profound honour” and its very existence “welcome recognition that the UK’s withdrawal from the European Union changes the conditions for peace, reconciliation and co-operation between Ireland and Britain”,

She recalled being introduced to a conference as a “fearless commentator” on Brexit and feeling compelled to admit that, far from being fearless, she was quite afraid.

“Regarding the impact of Brexit on the island of Ireland and, specifically, on British-Irish relations: I am almost fearful to weigh up what is at stake. I am anxious that those making decisions on these matters do not realise the consequences of what they are doing or – worse – do not care. [Call this ‘remoaning’ if you will; the point stands firm]

“What I am afraid of losing is something that I have played no hand nor part in creating. I was born after Christopher Ewart-Biggs was murdered. My personal and professional life have been shaped by what I have learned and benefited from when it comes to peace.

“I have learned from reading, listening and observing the care that was needed – from all sides – to arrive at a point where violence for political ends was brought to an end. And I have benefited wholly from the strength and patience of those who worked for peace.

“The diplomacy that Ambassador Ewart-Biggs embodied and the vision and resolve that Baroness Jane Ewart-Biggs exemplified are essential elements of our peace. The ending of violence depended on the tireless efforts of diplomats and civil servants, the courage of politicians and civic leaders, and the selfless indefatigability of quiet peacemakers across these islands and beyond.

“The continuation of peace depends on this still.

“Indeed, we would be naive to think that such achievements stand on their merits and protected from the storms. They are achievements of diplomacy and law and social norms and civic principles… they are, as such, human achievements, and they are vulnerable to change. It is quite conceivable that they can be lost.

“And it is with this in mind that I write, speak and, yes, tweet about Brexit.

“A Twitter account allows us to put complicated matters into simple 240 character messages that can be shared tens of thousands of times. Twitter uses gifs, memes, images and hashtags… But at its best it is about words and ideas.

“I am grateful for the Ewart-Biggs Memorial prize judges’ willingness to acknowledge the importance of social media in creating the political and social environment in which we live and interact. In a post-Covid-19 world in which our face-to-face, spoken communication is so curtailed, even with those we love, the written word has a new power. And digital media has a new importance.

“It will never replace or overtake the importance of the rigorous scholarly and intellectual work of people such as Tony Connelly, Kevin O’Rourke and Fintan O’Toole, who provide the fine detail, sharp analysis and crucial information that we rightly depend upon.

“Social media brings a reach and accessibility that can be of use in times of rapid, unnerving change. We don’t know when calm will descend. But we can share what we know; we can point to facts; we can recall what is of value; we can listen to those whom we’d otherwise never hear. We can even identify what we are afraid of. In so doing, we might be emboldened to act, to protect what we have learned and benefited from.”