Fungie and me, by the photographer who made him famous 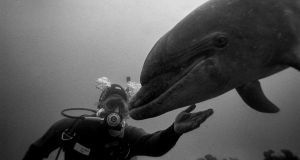 Fungie the Dingle Dolphin in 1987

It was in the mid-1980s when Ronan Quinlan first heard about a dolphin in Dingle Bay. Local divers Ronnie Fitzgibbon and John O’Connor had been swimming with the dolphin (named Fungie by a local fisherman) for about two years before he allowed them to touch him.

In September 1987, they invited Quinlan – a photojournalist and an experienced diver – to Dingle to take photographs of Fungie, who they estimated was about seven years old. “We debated whether we’d publicise it because we were worried he’d become harassed but we decided we’d do it,” says Quinlan, who then got the go-ahead to cover the story for the Sunday Press.

In the piece that appeared in that paper in October 1987, Quinlan wrote about his first encounter with Fungie on an inaccessible stretch of coastline with an underwater cliff face about two miles from Dingle.

“We gently descend to a depth of seven metres and wait, me sitting on a ledge, my heart pounding and my thoughts racing. I signalled to Ronnie to know where the creature was. Ronnie was laughing. I wondered what the joke was. Ronnie pointed behind me, and I turned to see the monster nuzzling the tip of my large fins. I nearly jumped out of my skin,” he wrote.

Recalling the experience now more than 30 years later, Quinlan says Fungie wouldn’t allow him to touch him the first time and that he didn’t bring his camera down with him until a few dives later. “The first time, the dolphin would only go to Ronnie. I couldn’t touch him, but on the second dive, he touched me.”

After the initial encounter, the divers moved into open water, and Fungie appeared again. “Suddenly I saw him emerging from the mist. He was coming towards me at speed… Dolphins have never been known to harm humans but the thought crossed my mind as he charged toward me that there is always a first time.”

Quinlan ducked into the water to avoid the dolphin’s tail but Fungie suddenly stopped flapping and gently passed by – one of the many games he would play with swimmers and divers over the years.

Ronan Quinlan’s photographs and story about Fungie have since been credited with starting the tourist trail to see the Dingle dolphin. Over one million people are estimated to have travelled to Kerry to see Fungie in the past three decades.

“The dolphin is always in charge, and it’s a privilege to get that close to a wild animal. There was a spectacular response to the story,” says Quinlan.

His favourite photograph among those that helped bring world attention to the Dingle dolphin is one that shows Fungie making contact with his fellow diver.

“The human contact with dolphins was the whole point of the story. The editorial committee in the Sunday Press wanted to use the photo of Fungie jumping near the boat but the close-up photograph of him with the diver demonstrated that he made contact with people,” says Quinlan. The lack of sightings of Fungie this autumn has brought the Dingle dolphin back into the national headlines. Quinlan says that no one ever knew how long Fungie would stay.

“Every time we went down, we thought he wouldn’t be there. In the initial stages, he didn’t approach every boat but in recent years, he approached every boat. They’ll miss him if he goes but Dingle has been preparing for this for years. It will keep going even if Fungie doesn’t come back,” he says.

Ronnie Fitzgibbon, who wrote a book about the Dingle dolphin and now runs the Waterworld Diving Centre in nearby Castlegregory, speculates that the constant storms since September may have driven Fungie out to deeper waters.

“It’s quite possible that he has moved out of the shallow waters where the sea is rougher. I’m hoping he’ll be back but people are much more aware of the aquatic life now. People are coming here to see the humpback, minke and pilot whales and other dolphins around the Dingle peninsula. They’ll keep coming even when Fungie goes,” says Fitzgibbon.