Paul Flynn: Three of the most delicious comfort food dishes you’ll ever eat 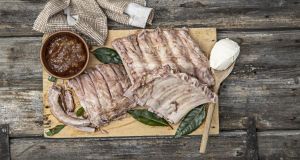 I’m sitting at the kitchen table watching the birds feed. I have no idea what they all are except for one interloping robin. Bird identification is now high on my things-to-learn list. It’s comforting watching them. I’m discovering my inner ornithologist. I’ve taken to buying one of those nuts-on-a-string things once a week to entice them into the garden; they have dutifully obliged.

My other new obsession is the  clapped-out camper van last year that is now parked untidily outside the house. I’ve wanted one ever since we travelled around New Zealand’s South Island, pre-children. I had never felt more carefree. It was sitting in someone’s garden, damp and forlorn, but it was love at first sight for me. I put the call in to the Minister for Finance, only to be met with an interminable silence, but I braved it out. I needed a new toy.

It was for the girls, while they are still young, I reasoned. We’ll have adventures that they will remember forever! I got my way in the end. It’s a bit of a money pit – that was to be expected but, more worryingly, I’ve been having recurring nightmares where I wake up spooning Martin Shanahan at Electric Picnic. I might have to get rid of the van, or see a therapist.

Comfort is needed more than ever in our food these days and these dishes offer it in spades. The duck dish uses cooked legs and pre-made Yorkshire puddings, a double cheat but, together, they make perfectly gooey sense for a decadent starter for four or main course for two. I serve it with a simple horseradish cream.

I had never heard of sloppy joes until recently but, I’ve been missing out. An American childhood was rarely without this messy creation, it seems. I got a thumbs up from my own two when I made them at home – hallelujah.

I adore spare ribs. These are different. Instead of sticky and unctuous I’m giving you the more pious bacon ribs. They adorn most butcher’s cabinets in Co Waterford. I eat them when I need a bacon fix. The sauces are for dipping and slurping without embarrassment.

Method
1 Put the wine, redcurrant jelly, mixed spice, pepper and thyme into a saucepan and simmer to reduce by half.

2 Remove the skin and any excess fat from the leg and discard.

3 Pick the meat from the bone and chop it into small chunks.

4 Take the thyme from the liquid and discard then, add the duck meat to the saucepan.

5 Continue to cook the duck over a gentle heat until the mixture is jammy.

6 Mix the horseradish sauce with the creme fraiche.

7 Warm the Yorkshire puddings then divide the mixture between them. Serve the horseradish sauce on the side.

Method
1 Gently heat two tablespoons of the sunflower oil, add the pepper and garlic and cook for a few minutes until the pepper softens.

2 Add the beef, break it up and cook on a higher heat until it starts to colour then, add the chopped tomatoes, tomato purée, brown sugar, mustard and chipotle sauce.

3 Cook for 30 minutes over a very low heat until it’s dark and sticky, then season to taste with salt and pepper.

4 Meanwhile, put the remaining oil and onions into a frying pan and cook for 20 minutes over a low heat and continue to cook until they turn a lovely amber colour.

5 Cut the baps in half and warm them up.

6 Spoon the meat mixture onto the baps and top with the onions, cheese and pickles.

Method
1 Cut the rib racks in half and put them in a large pot, cover well with water, bring to the boil and simmer until they start to fall off the bone – this might take up to 90 minutes.

2 Meanwhile, put the butter into a saucepan and cook it over a medium heat until it starts to spit and foam. Watch it carefully. It will quieten and start to change colour. At this point add the cinnamon and sugar, swiftly followed by the apples.

3 Continue to cook the apples for 10 minutes or so, smushing them as they cook until they become a pulp. Remove from the heat and you can blend with a hand blender if you choose or leave it a little lumpy.

4 When ready to serve, take the ribs from the hot water, drain and divide on to plates.

5 Drizzle the maple syrup over the ribs and serve with the warm apple sauce and sour cream on the side.