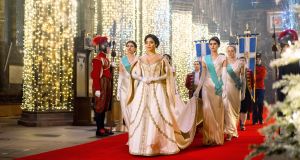 It is the latter. Prince Edward is a royal from Belgravia. According to a map shown briefly in a related film, A Christmas Prince (I do my research), Belgravia is a Balkan nation, though everyone living there has English accents, English class deference and, as my detail-oriented wife noted, English plugs on their appliances. Unusually, the people of Belgravia subsist entirely on Christmas-themed industries – tinsel, Christmas trees, candy cane, sleigh rides and magical meddling old men who turn up from to time as deus ex machinas to propel the plot.

Prince Edward is now married to our heroine Stacy (Vanessa Hudgens) who first appeared in the original Princess Switch as a plucky baker from the United States, sent to this European hellhole to compete in Belgravia’s version of Bake Off. She was, it turns out, the spitting image of Princess Margaret (Vanessa Hudgens), Edward’s fiancee from the first film.

In that film, they switch lives as a jape and do so without somehow triggering a constitutional crisis. By the end of their escapades, they are firm friends. “We are not so different, you and I,” Princess Margaret seemed to say. “For though I am of royal birth and you are a commoner from the colonies, are we not both, in a very real way, Vanessa Hudgens?”

I shouldn’t be surprised that Santa Claus is a part of their freakish menage. These people are deranged with Christmas

Yes, we all dream of a world in which Vanessa Hudgens can live in harmony with herself, so understandably this was a big hit for Netflix. At no point is it suggested that Stacy and Margaret are actually related, by the way, even though it’s not uncommon for royals to, and I quote a history graduate I know, “go riding all over the place”. No, instead their resemblance is just presented as the sort of cosmic coincidence that the simple peasants of Belgravia just accept, like absolute monarchy, subsistence agriculture and rickets from eating nothing but candy cane.

In the second instalment of the franchise, The Princess Switch: Switched Again, Stacy is now “Princess Stacy”, which shows that if you believe in yourself and in hereditary monarchy, your dreams can come true. Meanwhile, Margaret is about to be crowned queen of Montenaro, another of the famed yuletide states with which Britain probably now has a post-Brexit trade deal. But Margaret is melancholy, for she is estranged from her true love, Stacy’s hunky baker pal, Kevin. Ah, Kevin. He is but a humble Chicagoan baker with a precocious meddling daughter, but he is truly hunky and regularly bewildered.

Margaret gazes with longing at a heart-shaped locket featuring herself and Kevin and, also, Santa Claus. I shouldn’t be surprised that Santa Claus is a part of their freakish menage. These people are deranged with Christmas. When we first meet Princess Stacy she is in a bedroom that features not one but two Christmas trees. Later, not to be outdone, Princess Margaret can be found in a bedroom with three Christmas trees. If either of these women have regrets on their death beds it will surely be, “I should have… bought... more.. Christmas trees.” For the record, I think the film takes place in June.

Anyway, enough about their arboreal lust. The princesses need a-switching or the title is meaningless. And so it is that Stacy and Margaret, with the connivance of court officials and Kevin’s daughter Olivia, swap places once again. They do this so that Margaret can spend time salvaging her relationship with Kevin while Stacy impersonates her royal person at official events. Thank God Margaret’s not a surgeon, says you. Yes, The Surgeon Switch is a much darker entity. But I think you’ll still find it very Christmassy, and if producers would like to see the script they can contact me on Twitter.

Because this is a serious newspaper, I’ve decided to give you some analysis of the political system of Montenaro in so far as I understand it

But wait! There is a third Hudgens – cousin Fiona – a platinum-blond schemer who is flanked by delightfully choreographed goons and wishes to switch places with Margaret and be crowned queen in her stead. I’ve stopped marvelling at how fragile the Belgravian and Montenarian kingdoms are at this stage. Fiona and her two minions kidnap Stacy – who is pretending to be Margaret – and then impersonates Margaret in order to orchestrate a Christmas Eve coronation.

The charismatic Hudgens is, in fairness, up to this acting challenge, leaving no set ungnawed in her assault on two and a half accents and making me crave even more kinds of Hudgens. I suspect by the time this franchise is done she will be playing every single cast member and extra and the whole film will resemble the bit in Being John Malkovich where John Malkovich goes into the portal in John Malkovich’s head and sees a universe populated by John Malkovich. It will be like the Smurfs only with Hudgens. There’ll be a Hudgens with a tool belt, a brainy Hudgens with glasses and a bearded Hudgens called Papa Hudgens.

Until that wonderful day, and because this is a serious newspaper, I’ve decided to give you some analysis of the political system of Montenaro in so far as I understand it. Princess Margaret spends a lot of time engaged in trade talks, so it seems she has an executive as well as symbolic role. Montenaro does have a prime minister – she turns up for the false coronation – but I suspect she’s just a puppet, because at the end of the film Margaret has one treacherous underling sent to “the dungeon” and then offers clemency to cousin Fiona because, well, outside of the Trump administration, rich people don’t go to jail.

My point is: I see no trial. Margaret clearly controls the courts. At one point she also halts a priest’s flight by royal decree so he can marry her to Kevin at the airport where Kevin is escaping, so she has air-traffic control in her pocket too. No doubt international agencies are watching this corrupt kleptocracy’s extra-judicial imprisonments and high rate of air disasters, not to mention its preferential pro-Hudgens hiring policy and its candy cane-induced dietary problems. But lest it go unsaid, let me add that The Irish Times too will be keeping an eye on the queen of Montenaro and all such despotic regimes.