Nothing boosts the cinema experience like a mass walkout

Why are audience members so eager to flee screenings of The Painted Bird? 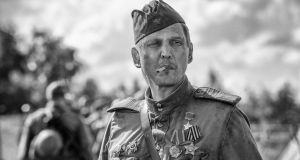 Don’t bet against The Painted Bird winning the Golden Bear at Venice this weekend.

There’s so much to the theatrical experience that you can’t get from a watching a film on even the biggest television. The communal buzz. The enveloping darkness. The sound of seats snapping up as disgusted punters storm ostentatiously from the auditorium.

I'm at the Toronto International Film Festival. Nothing does more to boost the medium than a film that triggers “mass walkouts”. Such a release will be playing here this weekend. Screenings of Václav Marhoul’s The Painted Bird at the overlapping Venice Film Festival have tested the finest journalists’ skills in delivering synonyms for evacuation.

Writing in the Guardian, Xan Brooks devoted his opening two paragraphs to descriptions of fleeing hacks. Xan tells us about “the well-dressed woman who became so frantic to get out that she hit the stranger in the next seat”. Apparently the screening was half full by the close.

Marhoul’s adaptation of an already controversial Jerzy Kosinski novel concerns a Jewish boy wandering desperately throughout Nazi-occupied Europe. The reports from Venice tell us that most left when Udo Kier’s character gouged out a man’s eyes and fed them to his cats. A child being pecked close to death by crows sent a few more to the door. Cinema seats don’t tend to flip back anymore, but it sounds as if the drama within the auditorium was impressive enough without those percussive thuds.

The history of walkouts in cinema is a long and exhausting one. For the most part, the people who stay the distance win the argument. Those who left with pinched noses halfway through The Exorcist and The Wild Bunch had their reasons, but they couldn’t stop those films being massive hits and durable classics. Indeed, the stories of punters fleeing for emergency rooms surely helped The Exorcist become Warner Brothers highest-grossing film ever. I am old enough to remember adults daring each other to brave a movie that was rumoured to trigger nervous breakdowns.

Mainstream cinema is now so neutered that the “mass walkout” has become largely the preserve of the art house. Few are the snowflakes who will stage an exodus from It Chapter Two. Highbrow directors may not much like how this works, but reports on panicked evacuation are just about the only way their films can secure mention in certain tabloids. It seems unlikely that, before Venice began, any news editors in the Daily Mail were bellowing: “We need something on the new Václav Marhoul!” Yet, as this column was being written, the Mail dropped a story with the headline: “Audience members fight each other to escape first screening of Holocaust film The Painted Bird, featuring brutal scenes of incest, bestiality, rape and mutilation”. The Mail ran similar reports – “13-minute oral sex scene” – on responses to Abdellatif Kechiche’s Mektoub, My Love: Intermezzo at Cannes. In June, the same paper noted that: “viewers walk out of gruesome horror film The Nightingale at Sydney Film Festival”. (Jennifer Kent’s epic is not a horror film, but don’t let that stop you, folks.)

Veteran schlock-meisters such as William Castle and Roger Corman would kill for this publicity, but, despite what the tabloids want us to believe, the pointy-headed auteurs of cultural cinema are rarely seeking such breathless coverage.

There are, of course, exceptions. Lars von Trier positively relished tales of audience members, handkerchiefs clenched over dampening lips, fleeing screenings of The House that Jack Built at last year’s Cannes. A few went when the poor duckling got his feet cut off (no ducklings were harmed…). Others hitched wagons when Riley Keough said goodbye to a nipple. “That is fine with me,” von Trier told me. “It is important that a film divides. I am disappointed that it was only 100 people that vomited. I would have liked 200 people to vomit.”

There is a smidgeon of worthwhile argument in von Trier’s response. A massed angry or disgusted walkout – as opposed to its bored or confused cousin – does suggest that the relevant film is engaging with audiences at some level. A year ago at Toronto, an actual punter admitted to stomping out of Claire Denis’s High Life. “I left about halfway through the film and threw up in the loos and saw about 20 people walk out – one crying, many shaking. So... that’s High Life,” she wrote on Twitter. Walkers do tend to exaggerate the massed agreement around them – as do those whingeing about blue language in 12A releases – but nobody could deny that Denis had got inside the complainant’s psyche. “Only connect…” E M Forster famously wrote. He wouldn’t have fancied anyone flinging Howards End angrily across the living room, but better that than calmly placing it down and forgetting to pick it up again.

Don’t bet against The Painted Bird winning the Golden Bear at Venice this weekend.